What more does she want?

So I saw this, appropriate for our first Independence Day Juneteenth national celebration: 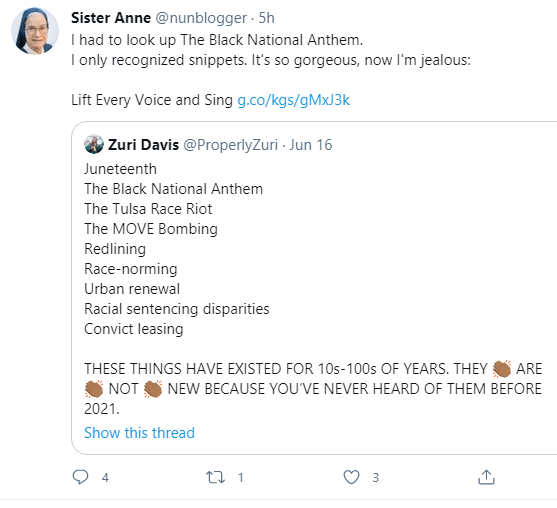 This reminds me of an old colleague in my ministry days.  I was vp of an ecumenical association here in our state.  He was an Episcopal priest of a very liberal bent.  It was during the months after the 9/11 attacks.  We had several impromptu meetings, meeting with state officials, medical experts, first responders and the like.  On this particular day, the priest in question gave a talk to the assembly. During it, he made a claim that, even in those days, seemed to me to be shocking.  He said the problem was that Americans needed to admit to the sins of our country's past.  Until we were honest about our history, expect this sort of thing to happen more.

Exactly why that would be, I wasn't sure.  But I was taken by the idea that Americans didn't admit to anything bad about their history.  All my life I had heard about slavery, racism, segregation, our treatment of American Indians, and the fact that women couldn't vote when the country began.  From my earliest memories in school, those and others were pointed out time and again.

Likewise, our popular culture, movies, television, textbooks, and even music increasingly emphasized the negative of America, its past and its institutions.  A great deal of general flippancy if not outright disrespect for, and condemnation of, America's heritage was already on the move.  On the other hand, when I was in first grade, I was introduced to the hero Christopher Columbus, and learned about the courage of the pilgrims, and was taught about our awesome Founding Fathers, the heroes of the Civil War, our greatest American presidents, and the heroism of America as it fought around the world to free people from tyranny and dictatorships.

So it was a mix of both good and bad, and we learned, just like admitting your parents aren't perfect, or your spouse has faults the way you do, it doesn't mean you can't see the greatness in it just as you see what's great in those you love who are nevertheless flawed.  Perhaps it shouldn't be 'my mother drunk or sober.'  But it doesn't have to be 'my mother, drunken bitch, let her die' either.

By the time I was in college and seminary, however, the growing criticism and condemnation of America was emerging as the only acceptable narrative.  Increasingly any mention of America's past glory or accomplishments was met with 'Yes, but have you considered its myriad sins, its racism, bigotry, genocide, slavery, persecution, imperialism, and on and on?'

In the 1990s, our first 'family vacation' was taking our oldest - then a toddler - to Colonial Williamsburg.  It was wonderful.  One of the best vacations I've ever had.  Yes, they pointed out the bad.  But it was mixed with heavy doses of the good, and the neutral.  The historical actors stayed in their parts, acting the roles out, even when we asked for directions to the bathroom.  The tours were always in full costume and everything kept to 'the period' (though sometimes, if we pressed for details about their careers or schooling, they would break after a time).  All in all, it made you proud of America.

Fifteen years later, we went back. This time we had all four boys.  We had gone back a second time, but that was shortly after 9/11 and things were a bit crazy.  We planned on trying to relive the olden days with all four boys.  What we encountered, however, shocked us.  First, about half of the actors seemed like they just didn't care.  The younger ones kept whatever earrings and body piecing they had front and center whether appropriate for the time or not.  Many stood around on their smart pones when nothing was going on, discussing the game or this or that latest concert.  We went on tours, and while some were still fine, others?  One of the tours, originally a lantern-light tour by a colonial lass, was this time given with a flashlight by someone in jeans and a jacket.

And the content of the tours of buildings?  My second oldest quipped after one of the houses we toured that he just didn't know how they had time to fight a revolution, what we abusing women, killing Indians and beating  their slaves all the time.  That was almost all anything was about.  Diversity was all the rage, so whether or not a particular historical figure would have been white or black, or even a man, didn't matter.  They let anyone be whatever.  I wouldn't have been shocked to find the governor  of Virginia come out as a black woman.  No care for accuracy, no particular investment in the details.

Maybe we went in an off year.  I'd like to think so.  I fear not however.  I fear it's what happens when people work at a place that remembers a vile nation of evil and racism and nothing more.   Which is why it's enough to say that this constant drumbeat of 'America isn't honest about its racist past' is like hearing people say McCarthy didn't spend enough time focused on communism.

Does that mean we know every case of racial sin in the 200 plus year life of this third most populated nation in history?  No.  Likewise, I'm sure I don't know all the good America has done over the years either.  I'm fine with imagining there were cases of great bravery, love, courage and sacrifice by my fellow countrymen that I will never know.  Likewise, I'm sure there will be case of its sins just the same.

I remember when the movie Hidden Figures came out.  Our local news station had a story about that film.  After the story, the two anchors said they had never heard about the black women who worked in our space program.  They added that was likely because - you guessed it - our country's racist past.  Well, no.  I never heard of them either.  I had never heard of anyone by name at NASA, except the guys in the spacecraft since if something went wrong, they were the ones who died.  It had nothing to do with race.  But if you are convinced America is and always was nothing but racist, you'll begin seeing racism in anything and everything, whether it's there or not.  The same with any nation, nationality or ethnic group.

For instance, I'm reminded of  Michael Jackson's death and how the press made him the first black artist to break MTV's racist barriers.  MTV objective and said the low number of black artists had nothing to do with racism.  The network was only a year old when Billy Jean was released, and anyone was free to offer their videos to MTV for airtime.  If they didn't, it wasn't MTV's fault.  Again, a problem with only looking for the bad is that if all you want is the bad, then all you'll find is the bad.

In my whole life, nobody ever said we should only look at America's triumphs and ignore the bad.  Nobody.  Ever. My parents, when driving out west on a vacation in the late 70s, drove by some settlements inhabited by Native Americans.  I remember my Dad - part Native American himself - looking at the poverty and squalor and saying it's a crime what 'we' (that is the US) did to them.  And yet, nobody loved America - it's history, heritage, values and foundations - more than him.  Just like I can see the flaws in my Dad and love him just the same.

Nonetheless, I'm seeing plenty of people act as if they want nothing but to focus on the sins of America, and condemnation of its history, heritage, values and foundations. When we see the Stars and Stripes, we ought to envision a watermarked Swastika on the flag, and seek out only the worst examples of our sinful past to defend the vision.  To do anything else is increasingly seen as racist denial of America's true nature.

If people want that, I can't help but think they want that for reasons other than just wanting truth and honesty.  After all, who spends all their time doing nothing but digging up the negative past about someone or something?  People who do that with other people usually have reasons other than those people's redemption in mind.  If we don't have ulterior motives, then there is no reason why we would do it with other human beings.  Likewise, we shouldn't do it with nations filled with human beings either.

Email ThisBlogThis!Share to TwitterShare to FacebookShare to Pinterest
Labels: Anti-Americanism, Racism, The Decline and Fall of the American Dream