But his righteousness had darn well exceed that of the Scribes and Pharisees.  Apparently he's stepped on a few progressive toes and has incurred the Left's typical Wrath of Tolerance.  Most recently, the Washington Post published a critical article about him, only to retract a few inconvenient abnormalities in the story.

That's not surprising.  As I said here. I have yet to see the press retract a story that would have made a prominent liberal or Democrat look bad otherwise.  The press, after all, increasingly doubles as the Left's secret police, dedicated to hunting down, digging up dirt, or in any way tripping up those in the way of the leftist juggernaut.  So if he has failed, sinned, or isn't worthy to be fourth member of the Holy Trinity, expect something about him to hit the airwaves, or at least Social Media, in the not too distant. Especially if he keeps being a figure of note in opposition to the race hate, tyranny, decadence and eugenics of the modern Left.

I don't know what he's really like.  I don't know much about him.  Maybe he's a terrible person. The picture on his Twitter page with his wife and children could be interpreted as such - certainly in today's age: 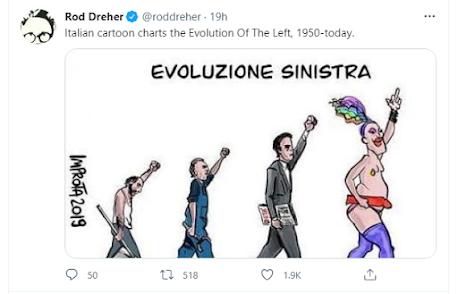 But all I know is that for anyone to speak up against the Global Left (Gleft?  Nah, that doesn't work) as he has done, they had best have their affairs wired tight.  After all, not only does the modern Left espouse judgmentalism, intolerance, and the need to abandon quaint notions of mercy and forgiveness and reconciliation, but a growing number of Christian leaders eager to stay in the Left's good graces appear ot be following suit. So if he gets caught doing anything wrong by any standards, watch out.  He has been warned.