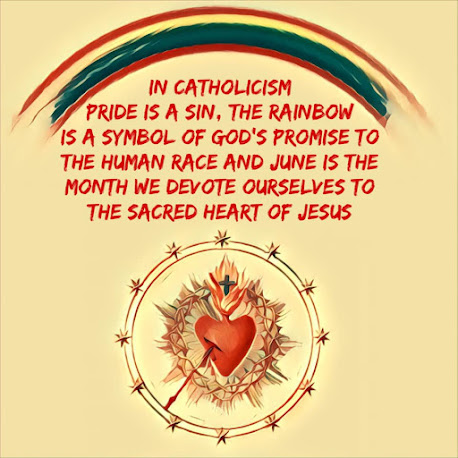 I refuse to celebrate Pride Month, or pride in general.  It is a sin.  Some argue the sin.  I reject the liberation theological premise that our values and ethics, indeed the Faith itself, should apply differently based on our status as oppressor or oppressed.  Hence, per an old seminary professor in my Protestant days, women should reject humility as a tool of male sexist domination, and instead embrace pride, which for oppressed women is a virtue.  Of course pride remains a sin for the domineering male.

But then I also reject Black Lives Matter sloganeering on general principle, and will never apologize for being called a racist for saying All Lives Matter.  Would that our Faith leaders would do so much as let the Faith inform the world, rather than continually retreating and acquiescing so that the world is what informs the Faith.

At some point we must take a stand.  Don't count on our leaders.  They're obviously not going to.  Don't trust politicians either.  Corporations?  Nope.  Clearly they've run the numbers and see the advantage in the end of democracy, freedom and life.  It will need to be the individuals who risk it all, but will be an example for those who dig up out of the rubble we're about to create as our civilization is thrown to the ground; the one that brought these ideas of life, liberty and God in the first place.

Posted by David Griffey at 9:00 PM

Email ThisBlogThis!Share to TwitterShare to FacebookShare to Pinterest
Labels: Decline of the Christian West, Musings