A birthday celebration plus 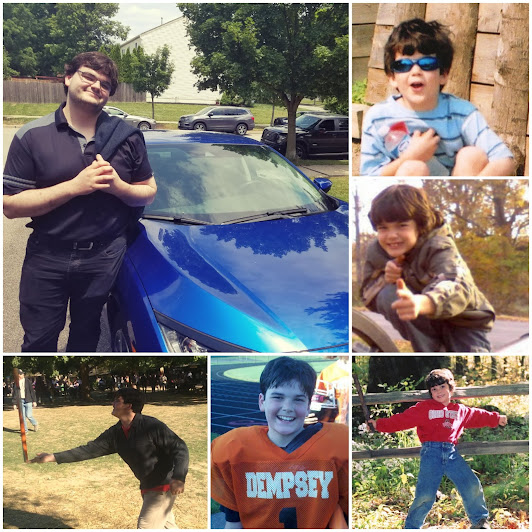 On this first day of our half of the year, I pause to wish a very happy and blessed birthday to our third son, now 21 years old.  Diving deep into the gene pool, he managed to find a AAA personality, unwavering self-confidence, and a single-minded determination that embodies the old term ‘bulldog tenacity’, but always with a wink and a smile.  May he be blessed half as much in his life as he has blessed us.

He was going to be a police officer, but two events changed that.  First, he was injured playing sports at a church picnic and was down for over four months.  It was during that time that anti-police rhetoric was at a low ebb, but still there.  That gave him time to think, and realize he was falling woefully behind the others around him who started training when he did.

Second, he attended a preparatory week of pre-academy training shortly thereafter.  That was a special 'into-basic training' event for the candidates to prepare for applying to the academy once they hit twenty one.  While there, he was shown things in the real world of policing that shocked even his jaded generation perspectives.

But what bothered him the most was that the instructors basically said there would be two types of training they would have too endure.  The first would be police training, what it takes to do the job, and what must be done to protect the population and keep themselves safe.

The second would be the part they now must play before the ever present video cameras, whether beneficial for themselves or the public safety or not. They were told because of the post-Ferguson backlashes and the growing anti-police rhetoric being embraced by the media and politicians, that they were going to have to do things sometimes that simply weren't the best way to do them.  If they don't do things this new way, it might destroy their lives faster than a criminal's bullet.  So the trick would be how to train new recruits over the way things need to be, and how to train them to do these things in ways that aren't conducive to protection and survival, but must be done in case of cameras, politicians or journalists.

That was enough for him.  When he chose not to serve in the military, he said he was prepared to die for his country, as bad as it's become.  He even understood that people die accidently in peacetime.  Those are the ways of life in a fallen world.  But he would not die because of a slipshod military that doesn't care about safety or preparation  for combat nearly as much as it cares about celebrating genitals and libidos.

He made the same call here.  Policing was tough.  He saw things in training that turned his stomach.  He could handle that.  But what he couldn't' handle was being told that they must put themselves in harm's way because that is of little interest to the legions of journalists and politicians who don't really care about them, and will gladly exploit them and set them into compromising positions just to score political points.  He understood that's what the media and politicians do.  He was shocked that the police were conceding the fact and already taking the first steps of compromise.

So he turned to a new venture in life, and that's to be an entrepreneur who is his own boss.  He reasoned, however, that the best way to  be in business is to learn business.  And that could be done most efficiently by climbing the corporate ladder where he was at the time.  Instead of a part time job to get money for college, he would throw himself into it full time, get promotions, and go as far up the ladders as reasonable, while learning the ins and outs of the business world in the meantime.

So he's already a manager, and has been for some time.  That's his own new car in the picture.  He's eyeing a senior management position that, if things work out, he might get within a year.  That would make his salary on par with his mom's.  He chafes at the thought of going to college.   He understands it might come to that, but he has no intention of going into debt slavery to get a degree from such places.  Instead he will accumulate money for that - and other things - while holding off for as long as possible.

Since his interests actually lie in the tech world, his business ventures will likely go in that direction.  Though he also loves animals, so you never know.  His powerful personality and confidences makes him a gem when it comes to dealing with animals of all stripes.  Nonetheless, he still enjoys tech stuff, and more than likely will go that direction.  For now he's using his journey to gobble up everything he can learn about the business world, especially aspects that are outside of his area of expertise.

He approaches his life like his beloved war games.  To him, you bathe in the rules, learn all there is, have things memorized so you can recall them in your sleep, work harder than everyone else, know more than everyone else, and plan for short term and long term at the same time.  It's got him pretty far before he even turned twenty one.  My guess is that, God willing, it will continue to serve him well.

UPDATE:  So we have a tradition that the person with the birthday calls the shots.   No surprise parties, we let them plan their birthday.  For him, being in management, his schedule was pretty tight so he kept it a low key celebration.   One thing he did do was ask for a special meal.  Choosing the dinner is also something the birthday celebrants are allowed to do.  So he chose an African menu.  We had never, ever cooked such fare before.  But my oldest who had once hoped to become a gourmet chef rose to the occasion and put together an African meal - with help from his mom and me.

Lamb tagine, South African yellow rice, Egyptian vegetable mix, and  several Moroccan recipes - roasted veggies, couscous and legumes - all rounded out the meal, with the obligatory dates, figs, and similar trappings we borrowed liberally from a roughly Mediterranean feel.  I have to say, it was delicious.  I think we've added another cultural cuisine to our culinary library. 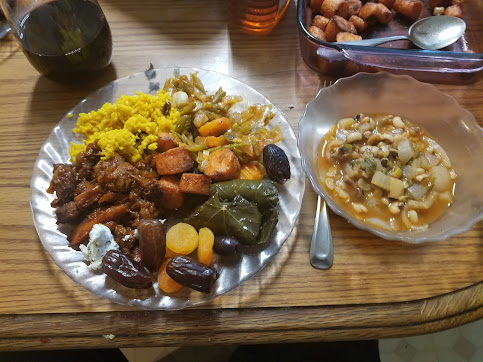 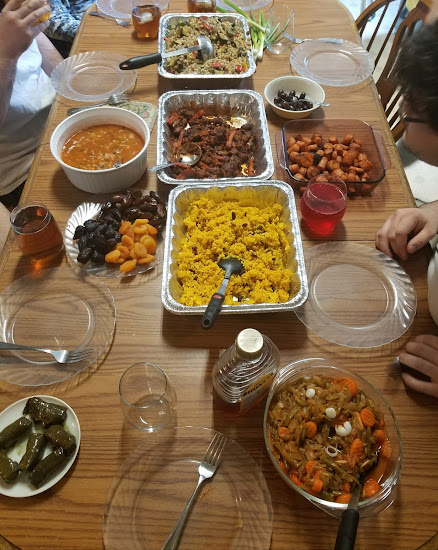 Email ThisBlogThis!Share to TwitterShare to FacebookShare to Pinterest
Labels: the Boys, The Family