A Happy Father's Day to my dad 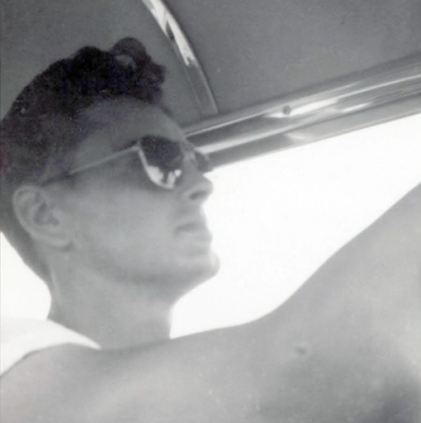 This was him in his younger days, long before I came around.   He worked on the railroad, but as soon as steam engines were replaced by diesel, he ditched the old 'engineer's outfit' and replaced it with polo shirts, jeans and his omnipresent sunglasses.  The only thing he kept were the hard work boots, since railroad yards can be a pretty dangerous place for soft shoes.   In hindsight, knowing my own sensitivity toward bright lights, I wonder if he had the same and that's why you hardly ever see him without sunglasses.   You never know.

He was a good dad, though not perfect.  Same with my mom.  Same with me.  Perfection is a standard I hold few people to, reserving it only for modern leftists who seem to use that particular standard as the one they measure anyone in history against except themselves.

Nonetheless, he was a great dad, in that he did what he did for us and for our sakes, in order to make for us a life he never had.  In some ways, I think that was the big mistake of that generation, the thought that the world's problems would be fixed by giving their kids everything they wanted.  Mom and Dad, however, never went that far.  Perhaps they had many of their generation's example to learn from, since my sister and I were born years and years after most of our cousins and their peers.

Because of that, I was raised with a dose of the old WWII generation pre-boomer standards and expectations, while also being indulged a bit, especially around Christmas.  But it was done, again, by Dad so that we could have what he never had, and that was a close family with the basics taken care of.

So here's to him. He taught me many great things, and was a great provider, father and dad.  I'll always be thankful and humbled by his example.  He is missed.

UPDATE: For my part, my sons who never cease to make me proud, have provided an appropriately sumptuous feast that, even now, they are in the midst of preparing for their old man: 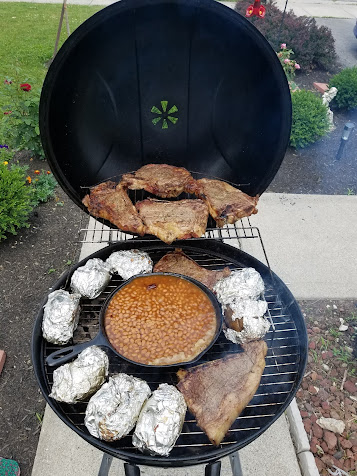 Yum.  If it tastes half as good as it looks and smells, I think my day will be set.  They're all four here with the the day off, so we will indulge in some olden days games and movies and family time and fun.  We may even catch a few lightning bugs, just for old time's sake.