The two Americas of Juneteenth in one image 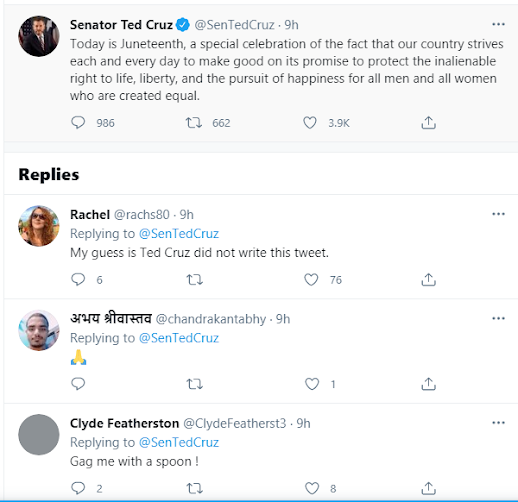 One tweet praising the day as but one step toward realizing the highest hopes of the American experiment.  The responses, on the other hand, showing what happens when you try to use Juneteenth to rally Americans around our nation instead of dividing.  There were more, similar, responses, I just couldn't fit them all in the page.  If nothing else demonstrated the two worlds in which moderns live, this would suffice.
UPDATE:  Meanwhile I'm seeing this reported more and more, that Independence Day celebrations are being nixed due to Covid, while Pride and Juneteenth celebrations, parades, parties and other gatherings are not only allowed, but promoted by the same places that are keeping July 4th Celebrations banned.  In our neck of the woods, Columbus banned both Red, White and Boom, but also the Pride Parade.  It has allowed Pride and Juneteenth gatherings and celebrations however.  Our town is still going on with July 4th, but today had extensive celebrations and gatherings for Juneteenth in conjunction with Pride events, such as family friendly Drag shows at a local park.  Again, Juneteenth has bupkis to do with unity or America, and everything to do with divisions to bring America down.  Those advocating for it are either the ones wishing for America to burn, or are useful fools.
Posted by David Griffey at 6:53 PM

Email ThisBlogThis!Share to TwitterShare to FacebookShare to Pinterest
Labels: Anti-Americanism, Patriotism, The Decline and Fall of the American Dream