Lessons for the Catholic blogosphere 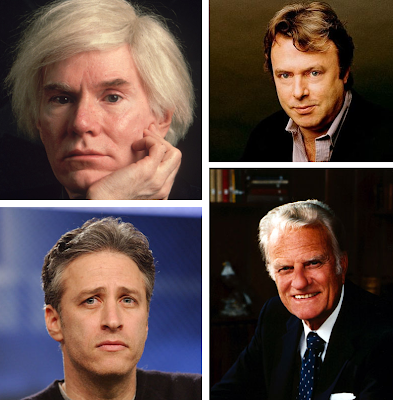 If you guessed Billy Graham, you'd be correct.  If you pointed out that he is the only Christian, you'd be wrong, as Warhol was reputed to be a practicing Catholic.  Yes, you could say he was the only Protestant Christian, and that's worth some points.  But here's the reason, for the purpose of our understanding of being Catholic, especially in the new media, the post-modern era, the Internet Age, or whatever you want to call it.  As far as I know, Billy Graham is the only one of the four shown for whom I have seen few if any complementary posts.  Not even when he's sick, have I seen a prayer post.  He's just not mentioned, or he's set up as an example of 'bad evangelicals'.  I'm not saying he's never been praised mind you. It isn't as if I've read every post ever written.  But as much as I've read praise posts of the others, I'm at a loss to think of any that have praised the good reverend, at least to the same degree.  The other three: liberal pro-gay marriage and abortion rights advocate Jon Stewart, radical progressive atheist, the late Christopher Hitchens, and Andy Warhol, avant-garde artists and advocate for the modern pornoculture, all have received at least one post praising them and lifting them up in some positive manner. In some cases, they've received more than one praise post.

So again, if you are an evangelical, a Protestant  or even a recent convert, get used to some changes.  You aren't in Kansas any more.  Those you once celebrated, Dr. Graham, or Karl Barth, or Martin Luther, or just about anyone on an average Protestant list, will hardly ever - if ever at all - be referenced or mentioned, at least in a positive light.  Meanwhile, expect a fair amount of high fives to folks who advocate things considered so horrible, that Catholics say they cry out to God for vengeance   How can this be?  Why wouldn't Catholics celebrate someone like Billy Graham more than, say, Jon Stewart or Christopher Hitchens?  Welcome to the Catholic blogosphere mate.
Posted by David Griffey at 11:26 AM

Email ThisBlogThis!Share to TwitterShare to FacebookShare to Pinterest
Labels: The Catholic Blogosphere