Remember when it was cool to celebrate America? 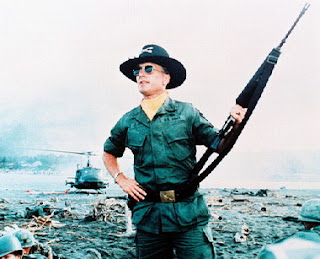 I don't.  A child of the post-Boomer generation, I never knew a time when patriotism wasn't popularly portrayed as Frank Burns, Archie Bunker, or Alex Keaton.  Our military was a bizarre cross-section of Rambos and Bill Kilgores, running about musing on their love of napalm in the morning.  Outside of the elementary school classroom, it was clear that focusing on the meaner aspects of our heritage was all the rage.  By the late 70s, inside the classroom as well.  And it wasn't just in the academic ivory towers.  It was filtering into mainstream America.  When the miniseries Roots hit the airwaves in 1977, America was already primed to take a long, hard look at the heritage we once celebrated.

Today, of course, it is all negative.  Almost any nod to anything in our past must include citations of racism, discrimination, imperialism, slavery, genocide.  We no longer have the capacity to see good without setting it alongside evil.  An American trend.  And not a good one.  As I've said before, it's one thing to say 'bless me father, for I have sinned.'  It's quite another to conclude I'm a complete loss with no redeeming qualities.  Once that occurs  you can expect the drugs, sex addition, alcoholism, and suicidal tendencies to come on quickly.  As we watch America's decent into post-power status, I can't help believe that's where we're at.  After all, a country that sucks as much as ours just isn't worth caring about, much less defending.

And as a Catholic, I must admit, the old Protestant stereotypes weren't always far off.  There is quite a substantial segment on the Catholic blogosphere that has little to no regards for the good old USA.  Ranging everywhere from philosophical condemnations, to axes to grind owing to a lineage that traces back to those oppressed by the American government, there are plenty who, as Catholics, have little to no love for the country in which they live.

This is aided, of course  by the progressive movement which, like any revolutionary movement, can find nothing but ill in this society it seeks to change.  The secular and liberal movements have accomplished much over the years by keeping our attention on the worst elements of America's past.  Just like in Europe, where tales of witch burnings, inquisitions, corrupt clergy, and oppressive papacy have helped to erode the Church's influence by being told and retold ad nauseum, so in America, the constant retelling of every terrible thing has gone a long way toward setting up the post-Christian/post-Traditional American society that progressives crave.  It's not new, of course.  Our Founding Fathers took a dispute over taxes and turned it into a cosmic clash between good and evil.  It's what revolutions do.

But now the revolution is coming to a close.  As more people are warming to gay marriage, as Americans are abandoning their traditional religious identifications, and those who would try to defend the relics of a bygone era are increasingly mocked and derided, and as legalized drugs, legalized abortion, and the eradication of public displays of religion are becoming the norm, it's not hard to imagine that in the not-too-distant, anything that purports to lift up the foundations of That America will go the way of the Dodo bird; once retailers have trained us to move past a certain Thursday celebration that is increasingly in the way of their bottom line.

But in the meantime, at the twilight of an America that once was, allow me to raise a cup of cheer and celebrate those brave adventurers who put it all on the line.  It's a testimony to our agenda driven scholarship that we don't see this event as an example of what could have been.  Invoking modern forms of bigotry, we look at the key participants, divide them into the Good Guys and Bad Guys, and judge accordingly.  That the pilgrims sacrificed all for a cause should make us wonder how good we are, who won't show up for an anti-war rally because of bad weather.  That the pilgrims and the Indians made a peace agreement that lasted almost 50 years should be a model of what could have been, rather than dismissed in order to condemn what came centuries later.  That the two groups who were complex and had many different traits and wants and desires were able to cooperate, could help us see how different people can come together for a greater good.

You'd think that might be the lesson.  But history, as always, tells us more about the historian than the history being written.  For me, obviously I seek to retain something of the good that was America, no matter its sins.  I feel we can even celebrate America without the need to always trot out some associated (or not associated) sin of the past.  Others, however, who are much more influential today, do not do this with our history.  Rather they attempt to ignore it altogether, aiming to impose their values on us regarding some other belief they have, or they seek to tear down the last vestiges of the American experiment.  For them, this day will be, at best, a vague family time that signals the consumer spending frenzy that is Wall Street's favorite holiday.

But for us who like keeping Christ in Christmas, it wouldn't hurt to see just what those Pilgrims did all those years ago to keep Christ in the center of their lives.  Oh sure, we can criticize and condemn, and many Catholics prefer that approach, I'm sad to say.  But for me, if I'm a little bothered by the growing encroachment of radical secularization, I could do far worse than take a play from the Pilgrims' playbook, and use it to inspire me to give it all for the cause.  They did.  And as a follower of Christ, even a Catholic, I can look at them with respect and awe and see that the past many want to change might be a past worth remembering after all.
Posted by David Griffey at 1:00 PM

Email ThisBlogThis!Share to TwitterShare to FacebookShare to Pinterest
Labels: Holidays, Post Modern Values, Scholarship in the Post Modern World, The Decline and Fall of the American Dream