The last football game of the year 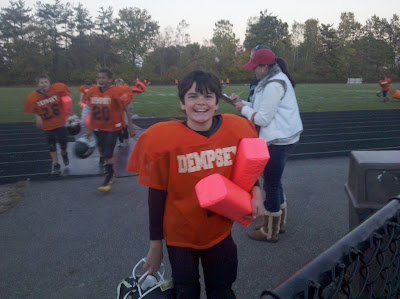 For my super-seventh grader that is.  Well done young fellow.  Almost a year younger than most in your grade, and you held your own.  True, he hit a rough patch in the center, and I feel the timidity he showed during that time cost him being put on the defense.  But he finally came back, and by the end of the season was a starting receiver.  Still not up to the level of energy and overall bone-crunching aggression he showed at first, he still managed to turn things around and make some excellent showings, including being part of the team's best game at the end.  True, they didn't win, but it was their best showing, and hopefully will be something they can build on next year.  Until then, well done again, and get going on the conditioning!
Posted by David Griffey at 11:00 PM