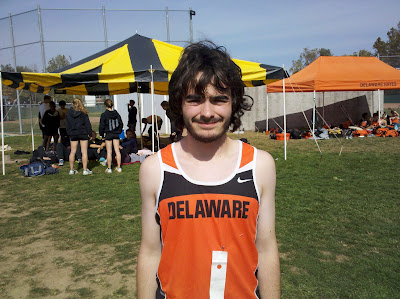 Yes, it's another season under the belt, and we can't help feeling a little melancholy knowing there will only be one left after this year.  After a rocky beginning, not aided by the fact that he started out being hit with a virus that lasted over a week, our oldest finally wailed on his times by the end of the season.  True, he didn't hit his PR (personal record) this year, but he did hit a seasonal PR at his last meet, and that means something.  It means he was improving.  Once the crazy deluge of the Otterbein meet turned him around, he PR'd every meet except one, owing to bad weather and muddy conditions.  Plus, he improved his placing, and with some more training, may finally break into that coveted varsity pack by next year.  He'll have to work for it, but if the last few weeks were an indicator, he's turned a corner and is ready to reclaim some of the well deserved accolades he received when he first went out for Cross Country.  Well done young man, you made us proud.
Posted by David Griffey at 8:00 AM