He is now seventeen 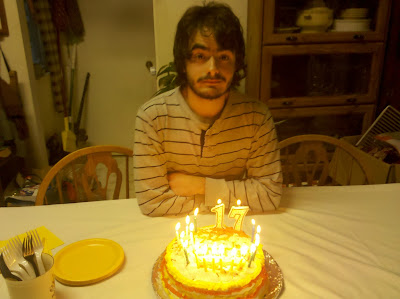 Happy Birthday to our oldest!  It's been toughest on him.  In truth, it was he who was thrown topsy-turvey more than any of our boys.  We were snug in a private school where his Mom was a teacher, and he attended the church where his Dad was pastor.  Being the son of a pastor in a private Christian school, he had reputation already handed to him.  He was a good student.  He was well liked.  All was right with the world.  And then BAM!  We entered the Catholic Church.

When him Mom's school found out, she was unceremoniously dumped.  Suddenly our two older boys were back in the public school system.  Our 8th Grader wasn't hurt as badly, he was only in 1st Grade.  But a tremendous amount of schooling and social development was missed by our oldest.  And for the next, oh about seven years, he has had to struggled to make up for what was lost.  Truth be told, he's the one who has noticed the dividing line between good life/bad life and becoming Catholic.  We pray daily that his faith withstands, and pray even more that somehow our material redemption might come from the Church somehow, so we can point and tell him we weren't forgotten.

Nonetheless, despite it all, he is a good student, a faithful child, and a great young man.  He has hovered around As or Bs in most cases, sometimes all As, but sometimes the missed years outside the public school system forced him to play catch up.  Naturally shy and quiet, he never quite made it back into the social mainstream that he enjoyed as a pastor's son.  Through it all, however, he's made us proud.  He's a fighter.  Even when he flounders, he gets back up and tries again, and as often as not, he improves.  He's come a long way, but today, I just want to say Happy Birthday son, you make us proud!
Posted by David Griffey at 6:40 PM

Email ThisBlogThis!Share to TwitterShare to FacebookShare to Pinterest
Labels: Important things, the Boys