On the Feast of Saint Francis 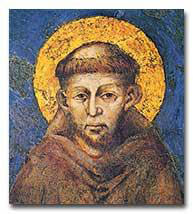 October just seems right for being the Feast of St. Francis.  Francis, as many are aware, is probably one of the favorite saints in all the world.  More than one skeptic, Protestant, non-believer or non-Christian has found inspiration and enlightenment in his famous prayer:

O Divine Master, grant that I may not so much seek
to be consoled as to console;
to be understood as to understand;
to be loved as to love.
For it is in giving that we receive;
it is in pardoning that we are pardoned;
and it is in dying that we are born to eternal life. Amen

This is a whopper, and always has shined as a succinct summary of what makes the Gospel so counter-cultural.  It's odd that so many admire it, and yet seldom do we see the results of its emphasis in our society.

Nonetheless, this, as well as the life of Francis itself, has inspired millions over the years.  As the eminent Medieval historian Morris Bishop wrote:


"Books on Saint Francis are one long cry of adoration and love.  Only rare cynics ... make only a thin piping in the general chorus   Everyone who knew Francis succumbed to his spell.  His power was Christ-like, and it is still at work in the world."*

This is so true.  Even as an evangelical clergyman, I had a copy of the prayer of St. Francis in my office, and generally found it well received.  Even parishioners who generally held the Catholic Church in contempt, nevertheless admitted to admiring the prayer, and sometimes, even admiring Francis.

And what better month to celebrate him, for October bears two distinctions that scream 'St. Francis' all over.  One, it is the pinnacle of Autumn.  It is the heart of God's fireworks display,  with Fall's red and orange and yellow painting the landscape in vibrant colors.  It is a time of harvest, when the bounty of the earth yields its fruits, and apple cider and pumpkins and harvest festivals remind us of the dynamic of life and growth and the abundant blessings from God's gracious love. 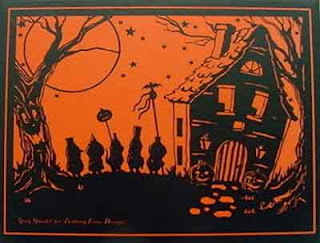 But it is also the season of death, the witching month.  It stands on the brink of All Saints and All Souls.  It is capped off by the informal All Hallows Eve, better known as Halloween.  Even despite the commercialism and the sexed up porn-outfits that find more and more kids dressed to thrill the hormones rather than chill the spines, there is still that echo of the hereafter, the netherworld, the realms of lamentation.  It is a season that confronts us as much as Ash Wednesday with the reality of our own demise.  And if we're careful, there is that whisper of damnation, that eternal fire that is behind the devil masks and demonic costumes; the reminder of just what it is that God's grace and eternal mercy saves us from in the first place.  In short, October is the month of vibrant life and nature's harvests, and death and the promises of the second death, or death as that release that helps us shuffle off these mortal coils so that we can finally enjoin the true presence of God in His throne room, beyond the crystal sea of glass and seven lamps.

Nonetheless, despite the promise and warning  we must accept them and live them.  The homily on Sunday focused on Jesus' warnings of the fires of Gehenna.  Plucking out eyes and cutting off hands rather than entering hell fully fit. It is a warning that despite all we have, the heritage, the faith, the Sacraments, we may still neglect so great a salvation for the next bowl of stew.  Despite all that we've been given, in the end when October is done, it will not be the death that leads to life which we will receive.  Perhaps it's tough in our secular,  material, skeptical age.  It could be the legacy of all ages of faith, that despite all who have access to the promises, so few will eventually take that narrow way.

Another student of Medieval history, author of an excellent resource for those not schooled in the depths of medieval studies, but who would like a good beginner's text, points out different reasons for the Church's struggles in the Middle Ages:


"The great shortcoming of the high-medieval Church was not gross corruption but rather a creeping complacency that resulted sometimes in a shallow, mechanical attitudes toward the Christian religious life and an obsession with ecclesiastical property...among much of the clergy the profundity of the Faith as often lost in the day-to-day affairs of the pastoral office, the management of large estates, disputes over land and privileges, and ecclesiastical status seeking."**

Even Francis himself could not start a movement that forever survived the thorns and thistles of this present darkness.  Hollister observes that the 'Franciscans continued to serve society, but by the end of the thirteenth century, they had ceased to inspire it."***  This being the result of the inevitable worldliness, the focus on wealth, bills, taxes, whatever it is that steals that zeal of the Spirit, that helps the Evil One swipe those seeds from the rocky soil, or entangle them in the thistles and briers of worldly care.

So knowing what we can have, what we enjoy as Catholics, a Sacramental lifeline to the Almighty Himself through the Body and Blood of His Son, we should rejoice and yet do so with caution.  Francis enjoyed life, indulging in everything, even death.  Yet in his best efforts, his movement would succumb to all the problems that the Apostles of Jesus would face, and that the Church has ever struggled against.  The point isn't that there will never be the struggles or temptations or even failures.  The point is the recognize them, admit them, and when we are beset by them, to turn away, be prepared to cut off that limb, and know that death need not be a decent into dark hopelessness, but rather the doorway through which we enter to enjoy eternal bliss in the Divine Light of God's eternal love.