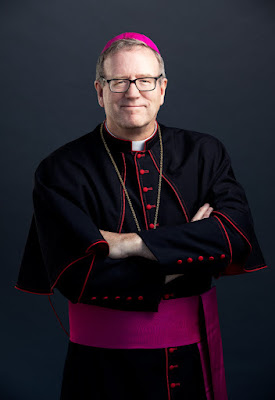 The liberal Catholic publication National Catholic Reporter joins the hunt.
Bishop Barron.  Poor fellow.  For more traditional Catholics, Bishop Barron is too wishy-washy.  He plays with universalism and tends to have a 'let's just get along' approach to enemies of God and man.

That's why he was beloved of many moderate and even liberal Catholics.  It was through them I was introduced to the works of then Fr. Barron.  Especially enjoyable was his video series on Catholicism.  And critics of Fr. Barron from back then?  Just a bunch of right wingers, so forget about it.

Now, however, it's those same Catholic liberals and former moderates leading the charge.  The accusation is the unforgivable sin of sexual misconduct.  Far removed from the dreamy, hazy days of rehabilitate and reform, sexual misconduct is one of a growing list of unforgivable sins that should be branded on your forehead for life. Until Jesus forgives you and lets you into heaven that is.  Otherwise, your criminal arse belongs to us - so said Beth Moore in a conference a couple years or so ago.

As with all such things, it's not the sins or failings of a single person, but guilt of one taints all. Thus it becomes a 'workplace' issue.  You know the terms: hostile workplace environment, toxic workplace environment or, my favorite, hypermasculine boy's club environment.  Heh.  That's because we're setting BLM and Trans athletes aside for the moment and bringing back the old #MeToo narrative of 'the always honest woman against the always sexist man' template.  Oh, and genders are binary in this case.

Why the sudden move to destroy Word on Fire (for that's what this is about), and wreck the reputation of Bishop Barron?  I dunno.  But I've seen posts, articles and Twitter for months now going after him.  A man who was once a darling of moderate Catholics everywhere.  Again, I don't know why.  I can guess, but there's really no telling since people usually don't admit to ulterior motives.

Or at least usually don't.  I'm thinking of the Bill Cosby Pound Cake speech.  I mentioned that some time ago and one of my readers sent me to a link to The Atlantic.  In that piece, the journalist appeared quite honest about the connection between his speech and the subsequent accusations made against him.  That's because Cosby didst blaspheme the liberal gospel.  In that infamous speech that outraged the Left, Cosby said he'd give you racism and American white supremacy, but it's time for black Americans to stop whining about the past and take responsibility for their own actions.  Within months there were accusations of sexual assault and the beginning of the end.

This has that vibe to be sure.  I know Bishop Barron has outraged Pope Francis fans by agreeing with Pope Francis, but not heaping scorn and loathing on the critics of Pope Francis.  I also know shockwaves went through the Catholic Left when Bishop Barron condemned leftwing intolerance and censorship (euphemistically known as Woke or Cancel Culture).  More to the point, he doesn't filter Catholic moral teaching through leftwing political narratives.  For many today, there appears to be politics to the right that are intruding upon the purity of our faith, and then to the left is Jesus.  Such a view doesn't allow for non-liberal hermeneutical options.

I'm not saying if there was wrongdoing it shouldn't be addressed.  From what it looks like it was in the fellow's personal life - which is soon to be nonexistence if the Left has its way.  I'm simply noting that this does not appear to be about righting a wrong, but the Left's old favorite of Destruction by Association.  That is, a guy does something wrong, and suddenly all men are misogynists in a sexist environment terrorizing women.  There is a big difference between those two.