Where are the Juneteenth Righteous Gentiles? 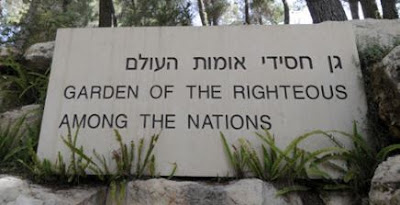 Or any Civil Rights Righteous Gentiles?  I though of that when this came across my desk.  It's just a local page going over the various Juneteenth celebrations in the area.

But that brought to mind a local story  I saw yesterday that interviewed someone about Juneteenth.  It dawned on me that, if that report had anything to say about it, there were no white people involved in the events of Juneteenth.  To hear the individual interviewed, it was just blacks finally and inexplicably being freed after not being able to be freed and celebrating freedom.  Nothing about who actually freed them.

And this made me kick around what I've noticed before.  There are no Righteous Gentiles of the Civil Rights Movement.  You get who the RGs are I assume.  Those are the non-Jews, both Christian and not Christian, who risked and lost their lives to save Jews from the Nazis.  In Jewish culture, they are held in high esteem.  There are memorials, tributes and special accolades.  Oskar Schindler is the most famous, but there are many others.  It's the Jewish community's way of making sure those who did what they could are remembered and celebrated.

But I see none of that in the modern BLM/Civil Rights Era.  Truth be told, I've not seen such an emphasis ever.  The focus within the black community seems to have ever been on the sins of America and white Americans, and not those who broke with the majority to aid the black community.

In recent years, however, it seems to purposefully downplay or ignore anything positive done by whites on behalf of black Americans.  I saw on a streaming service a 'making of'' special telling how the movie Harriet (as in Tubman) was made.  In fairness I didn't see the movie.  But if the special about its production is any indicator, you'd never know white people had anything to do with the Underground Railroad.  It was blacks saving blacks and helping blacks and smuggling blacks.  Again, the movie might be different, but not if that special was anywhere near accurate.

Same with the Civil War.  I saw a black professor back in February talking about the plight of blacks in America. He spoke of blacks being victims of a racist terror state, the indignities and horror of their experience being on par with Jews in Nazi Germany. When it came to the Civil War, he made it clear there were two armies of racists fighting each other over slavery, and yet not caring about slavery at all.

What is it with the black community and refusing to give credit to white Americans?  Do they do so, and the press just bends over backwards to ignore it?  Is there a majority of blacks who do celebrate the sacrifice and bravery and courage of white Americans who stood by them?  Are there black Americans who acknowledge that without July 4th you don't get Juneteenth in any event?  Does the press simply make sure it's only the radicals who want America bleeding on the floor who are represented?  We know the press is capable of such tricks.

Or are those radicals the majority view within the black community?  I don't know.  It's just something I've noticed in recent years.  And call me a troublemaker all you want, but I'm always leery of anyone who refuses to give credit where it is due, especially to an entire ethnic group, especially for those within that group who died for their cause.

Posted by David Griffey at 7:07 AM