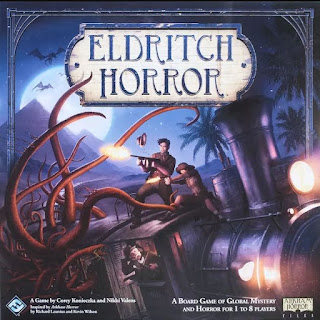 Coming into this eleventh hour of our family's traditional time together.
Last Christmas my third son, our board game aficionado, received a game called Eldritch Horror.  It's based, as you can guess from the name, on the works of H.P. Lovecraft.  I was never particularly into Lovecraft, just as I'm not into Sci-fi and Fantasy in general.  I've read some of his stories.  The first story I read was Pickman's Model.  That's because I discovered an old Night Gallery episode I remember being scared by as a kid was based on that story.  From there I read some of his better known stories.  Eh.  I liked them as far as they went.

But the board game my son received, I must admit, puts a tremendous amount of fun and suspense in game form while remaining true to the 'feel' of Lovecraft.  I like that.  Games that purport to 'recreate' a particular historical period, or fictional genre, or specific mythos, had best do so.  I find they often fall short, and end up being nothing but checkers with embellishments and artwork.

But Eldritch Horror strikes that fine balance between playability, mood and feel, complexity and accessibility.  Not bad, considering the most cumbersome part of it is the set up.  If it has one serious flaw, it's that it takes my son an hour or more to set it up.  This is a game we can only play if we have the better part of the day at hand.  Given how seldom that happens, it's amazing we've played it as much as we have.  That we have played it so often shows how much we enjoy it.

To me, the best part is the globetrotter feel.  The premise is that, per Lovecraft, some crazy super-tentacled elder space god is just itching to break out and exterminate life on Earth.  To stop this, the players represent a ragtag bunch of heroes who are rushing about the world, looking for clues, fighting slimy meanies, and otherwise doing what they can to close these gates between our world and that strange other place of Lovecraft's mind.

This isn't the first 'rush about the world' game we've ever played.  As youngsters, my boys had a game called Dragonology, based upon a kid's book they owned.  It was fun in its way.  But the fact that you needed to run around the world never seemed to mean anything other than move your playing piece. I've found other, similar games to be the same.

In Eldritch, however, where you are in the world has a direct impact on what happens to you.  If you're in the Amazon your encounters will be different than being in London, or in Istanbul, or in the Himalayas.  It matters where you are, and the flavor text and possibilities varying with different locations is a major boon for me.

Throughout the game, each player plays a different character, sometimes more than one since life expectancy for characters is often limited.  I typically play the same one, Charlie Kane (as in Charles Foster - get it?).  He doesn't do much and is no fighter.  A tycoon presidential candidate wannabe, his job is to use his business skills and contacts and wealth to obtain much needed items and resources, and then divvy them out to the others so they don't have to waste time getting such items themselves.

I'll be honest that many of the rules are a bit beyond me, and I look to the others to guide me along with what's going on.  That's why I like that character.  For his part, he only tries to get his hands on rare items to help the others, so I don't worry about the greater strategies or goals.  Though I try to be cautious because, of course, every city in the world has its dangers.  I've already come to a bad end twice in San Francisco's Chinatown.

But there you have it.  Again, we don't have nearly the time we used to. We still have some time, but in those cases the amount of time is limited to a sit down, reading books together, maybe a movie we've watched together, sometimes chattering about religion or politics, or a quick game.  But when we've had the time, we've brought this one out and enjoyed it.  As far as games based on genres that aren't my cup of tea go, I'd say this one is near the top of the heap.

Email ThisBlogThis!Share to TwitterShare to FacebookShare to Pinterest
Labels: Fun stuff, the Boys, The Family