Why I'm waiting on the whole 6% news about Covid 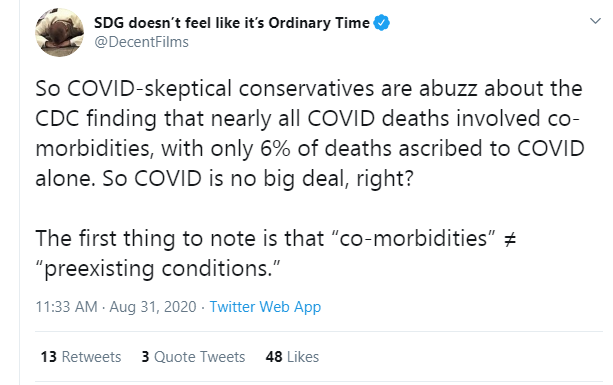 What's that?  The news reported that only 6% of those who have died of Covid died only with Covid.  The other 94% had various other conditions, ailments, or comorbidities (a new addition to the breakfast table lexicon this year).

Now this isn't actually news.  Truth be told, and I hate to break it to people, but "Science(TM)" doesn't always know everything.  It doesn't even know what our pop culture narrative assumes it knows (which is usually close to everything).  Nor is there some magical science room where all the stats and all the proof of all the facts in the universe are kept and we can just go in, open a file, and there's the answer!  Nope.

Fact is, one thing we've learned during all this is just how limited and often ignorant of things scientists can be.  So far, most of what they've come up with - aside from the technological equipment that can help keep people alive - is what pioneers in the 19th century probably would have figured out: if you get sick, take care of yourself, avoid others, try not to spread it, and if it gets bad get to the doctor. Everything else is still up in the air, or the science has proven to be wrong, or they just don't know yet. The same goes for most academic and scholarly disciplines, but right now we're just doing science as it relates to C19.

So it's nothing to see that there isn't an exact count of how many actually died of the Flu in a given year.  Or AIDS. That's another common one.  You'll get how many died, but then you'll often have a little asterisk that says the numbers are likely much higher, but it's tough to tell if it's AIDS or something else the individuals died from.

Now, if I had something to ask, it would be why it hasn't been until now that this has become a thing.  I wouldn't be like the good deacon above and flippantly dismiss it.  I would like to know why in other cases, when there could be many causes behind a person's death, we often only get the most restrained reporting of numbers regarding those who clearly died of the ailment in question.  Why, for instance, do we hear that 7K to 9K Americans die of AIDS, and only see in the footnotes that the numbers could be much higher, but we don't know?  Why isn't that how Covid-19 is reported: "There have been over 10,000 deaths from Covid-19 in the US, but when considering co-morbidities and other compromising conditions the numbers are likely much higher."?

Why we wonders?  That's what I would like to know.  Perhaps it would be nice knowing if that discrepancy is common (6% vs. 94%).  I mean, is it usually that big of a difference?  But if I had one question at a microphone in a town hall, that would be my question.  Why the difference in how Covid versus other infectious diseases is being reported where deaths are concerned?