Michaelmas and the rise of Satanism in America 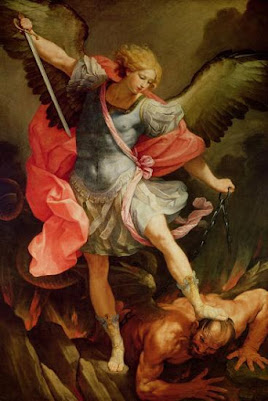 For some months, my boys have talked of two things they've noticed in college.  One, it's not an exaggeration to say that half of their fellow students believe America to be the great Evil of the world; a 400 year old genocidal racist Nazi slave state that needs burned to the ground.  Since my oldest is in Constitutional Law, the idea that half of his fellows see this makes you wonder what things will look like fifty years from now.

The second, and they've mentioned this several times, is the strange attraction that no small number of their peers seem to have for Satanism.   My second son calls it 'edgy atheism', since most don't seem to actually believe it, but it's cool and, since atheism offers nothing in terms of anything, a chance to 'belong.'

In any event, it's indicative of our secular age, that people embrace what should scare the bejesus out of them, and do so flippantly.  That's because they don't really believe.  And I fear that is true for more in the modern age than we may care to admit.  In fact, I fear it may apply even to those who wake up on Sunday mornings, get dressed, and drive to the nearest church service.

Somehow the faithful conceded the prism of reality to the atheists, secularists and godless, and have tried to spin it with God spin ever since.  It hasn't worked.  Mostly people today seem as concerned about such things as eternity, heaven, hell, demons, angels and spirits as much as they are leprechauns, unicorns and Eskimos.  That is an indictment on the churches and their leaders as much as anything. But it's also an indictment on those of us who have decided our modern era puts at the center of reality a material lens through which to see things, resorting to religious explanations only after all else fails.

Today is the Feast of St. Michael the archangel.  That's the one traditionally pictured putting Satan down in his place where he belongs. He is no longer mentioned in the penitential act of the Mass, whereas he used to be petitioned along with the others who continue to be.   Perhaps that was a later addition that was then dismissed.  I don't know.  I just find it interesting that calling upon St. Michael was part of the Mass, now it isn't.  Then again, before we left the parish several years back, they also removed the Fatima prayer when they prayed the Rosary (...save us from the fires of Hell), so there you go.

Sometimes you wonder how people could just willy-nilly flirt with the powers of hell, and then you wonder why they wouldn't.  After all, the Church at times seems almost apologetic about such matters nowadays.  Hell.  Salvation.  Sin.  Demons.  If mentioned, we seem to quake in our boots while doing so, as if a universe of atoms and cells and DNA has no room for such antiquated and disproven notions and fancies.

On the positive side, and in a timely manner, a contributor to Huffington Post has penned a piece stating she is now a proud Satanist, in the 'edgy atheist' manner.   To this, John C. Wright steps to the plate and show the flaws, the evils, and the blindness of such a view.  Other believers must step up to the plate and proclaim the spiritual reality that overshadows the mere material universe in which our physical bodies live, or more will imagine we are no more serious about a netherworld than we are the depredations of the latest chimera or minotaur monster.  And if we the believers aren't, we can't expect the proud godless to so for us.