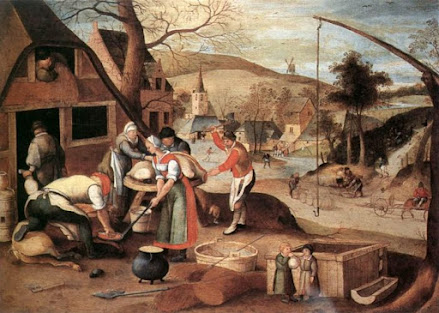 Some years ago I posted on this little bit of the old Catholic calendar, here.   It's one of many times in the yearly cycle when Christians in the old countries would have marked the changes of seasons with a decidedly God centered perspective.

That stands in stark contrast to today, where I fear to many of us - and yes, I include myself - have succumbed to a secularist vision of reality, with only a sprinkling of pixie God dust on the whole to give it religious flavor.  I can't help but think that's a big reason people are leaving the Faith.  Sometimes I think they look and imagine what the youngster at the youth group said a year or so ago.  That is, they don't believe it because they don't think that many people who pack the pews believe it anymore either.

Ouch.  I'm sure modernity and secularism have taken their toll.  After all, we're all guilty of more or less buying into progress and STEM and often taking a secular template for understanding reality and smacking a God stamp on it and figuring that will do.

Sometimes I think it's because we forget the primary Latin basis for the word 'Supernatural' - meaning of or given by God, and accept a more modernist, techno-definition that means 'something beyond nature' or more to the point, 'something that science using science can't explain - yet.'  Somehow that allowed this 'over here is the real universe and science and tech and all, and over there is your religion' dichotomy to emerge.

Harkening back to those old farmers I wrote about a few weeks ago.  We often think of old timers as superstitious folk seeing demons and spirits in the spoiled milk and blighted harvests.  They imagined, or so we assume, that the horse went lame or the cow dried up because of witchcraft or those pesky evil spirits again.

But here's the thing.  In doing so, assuming they saw things that way - and there's a strong case to be made that, to a degree, they did see things that way - I notice something.  They still lived life.  They still went about finding the best ways to plant, to tend, to harvest.  They tried to devise new ways to rotate or irrigate crops, or better methods of fertilizing the crops.  They tried to find better ways to build, or to reap, or to do anything they did.  They may have seen Creation as inherently and irrevocably spiritual in nature, but that didn't force them into an 'either/or' choice when it came to understanding things.  If they had a 'eureka!' moment regarding crop rotation, they didn't suddenly imagine it was all them and therefore God, while prayers are certainly in order, will have little to do beyond some vague 'He makes it all happen' notion.  The imminent presence of the divine and the spiritual did not take a step back because they invented a better plow.

Atheists are fond of the 'either/or' approach when it comes to religion.  If we believe in God, then why not just sit and pray?  In fact, following a shooting or in light of an epidemic, they'll often give us the choice to either pray and turn to God, or to seek real solutions or better policies.  Not a few believers have also adopted that approach.   Many other believers scoff at such a lame choice.

But I wonder.  Is it just a ploy by atheists, or do they see something in us and the way we go about things?  Does something about the way we live our faith today suggest that such a choice between only two options is the only choice we should be given?

Anyway, here are a couple nifty places at the always informative Fish Eaters.  This looks at the whole idea of "Ember Days" in the old Catholic calendar, and this is focused on the autumnal Ember Days, coming shortly before Michaelmas, the historical nod to the archangel Michael, who seemed to have more emphasis in years gone by than he enjoys nowadays.

I'm still thinking on the post suggesting we turn away from being hung up on all the corruption and stupidity and evil that go with the usual in this crazy world.  Jesus said to enter through the narrow gate, because few are those who will find it, while many will enter the broad gate that leads to destruction.

As we watch the sun set on the West, and see even now believers fall over themselves to justify death, killing, racism, hate, corruption, oppression, hypocrisy and all manner of evils, often in fealty to social or political movements and allegiances, it might be worth pondering that Jesus was onto something.  Not just in some eschatological sense, but in the basic day to day of human history.  For most of the world's problems will as often as not involve most in the world.  Few will be those who truly find solace in God, and are able to weather those storms in peace and fealty to the Almighty by keeping their eyes on the prize.

Perhaps getting back to the basics, and seeing the world through God and His Creation before we see it through the secular lenses that have brought us to this point could do some good. It's worth trying, that's for sure.

Posted by David Griffey at 7:35 AM

Email ThisBlogThis!Share to TwitterShare to FacebookShare to Pinterest
Labels: Musings, Reflections, Religion in the World