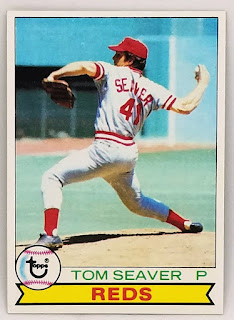 Tom Seaver has died.   He was a pitcher who, for a time, pitched for the Cincinnati Reds.  I realize that for many people, and most youngsters, the name will mean little.  Baseball fans and gurus will know the name.  But it's one of those names that, for some people like me, strikes a certain chord.

Technically, though he was with the Reds during their legendary Big Red Machine days, he actually came in after the apex of that time.  With new management, the Reds wisely began letting go the squad that had led them to one of the most dominating periods in any sport in history.  Beginning with 1977, the Reds began dismantling the Machine, and that's when Seaver came on board.

Nonetheless, the Machine was still active and, for us Buckeyes, being part of that team, even in the waning days of its glory, enshrined you in our collective memories.  As a youngster back then, Seaver's name was elevated to the same level as Johnny Bench, Ken Griffey, Joe Morgan, Pete Rose and the rest of the famous Great Eight.

Perhaps it was regional, and even baseball fans in other parts of the country knew him less, the Mets notwithstanding (heh).  But for me, his name and that part of my childhood is forever linked.  To hear his name conjures up memories of all the posters and all the autographed baseballs and all the paraphernalia my fellow students would parade around during that time.  So big were the Reds that a young tomboy named Cindy was able to pass off Pete Rose as her favorite historical figure in a school report we were assigned.

So my prayers for him and his loved ones.  May the grace of God cover their hearts and minds and embrace him as he slips the surly bonds of earth.  He was a intrical part of my life's vat of memories, and for that I will always be grateful.  Pax.

Posted by David Griffey at 7:58 AM