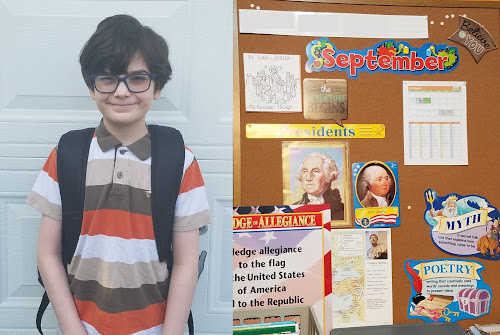 Things are a little less crazy with the older boys going their way - even if they live at home for the time being in doing so.  Being beneficiaries of white privilege, they work full time jobs and take classes around their schedules accordingly.  But being home for that is still not the same as being home as a high school or younger student.  There they were still 'kids' in our charge.  Today they're adults going their own way, doing their own thing, and navigating through the crazy that is 21st Century America.

That leaves our youngest home now, more or less on his own. The only other person, beyond my wife and I, who is at home is my Mom who we are blessed to care for in this September of her years.  Since things are still shut down, and outside of public schools there isn't much available, it's going to be rough.  As a homeschooler, he typically got his socializing through various extracurricular activities, church school and the like.  Those are all either canceled or online.  With his brothers going their ways, he's going to be one solitary kid, at least until things get back to some semblance of normal.

So we'll try to find ways to make it more interesting in the meantime.  Not that school can't be interesting.  We're doing our own kitbashed curriculum, gleaned from a couple published programs while preparing for him moving to Kolbe Academy once he hits 7th Grade.  We follow a quasi-classical approach, and he will be diving into the classics of antiquity this year more than he has in the past.  He's currently learning Chinese, but we'll add Latin toward the second half of the year.  We've also added a tech/coding (in the works) subject line since he is very, very and I mean very interested in tech and programing.  Being somewhat deficient in those areas ourselves, it will be learn as we go.

So that's it.  As I said, this week will be a bit sparse, which is fair since I was supposed to have ended most blogging several times already!  Given that he already missed

Email ThisBlogThis!Share to TwitterShare to FacebookShare to Pinterest
Labels: Homeschooling, Important things, the Boys, The Family