A final warning about bad apologetics 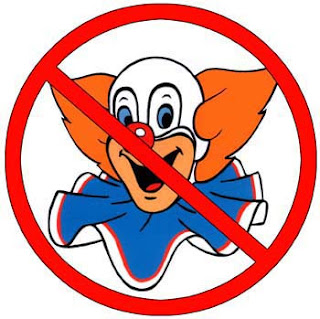 Not to beat a dead horse, but I went back one last time to the post about Mark's blog I from the other day.  I answered briefly a late commenter who, following the liberal Protestant objection, asked why homosexuality is wrong if Jesus didn't specifically mention it?  Never mind he defined marriage as between a man and a woman.  We won't even get into the laughable exegesis that insists the Bible never condemns homosexuality except where it calls for homosexuals to be killed in Leviticus.

While answering her as best I could, I brushed through to see if anyone answered any of my last comments.  I do love having the last word.  While there, I noticed that, as I said, several had come to the post to cheer on Mark's observation that what the CoC did was nothing less than hate filled homophobic bigotry and evil.  That was not an issue, since that's mostly what Mark said; the Church of Christ had compromised Unconditional Love.

Then, as anyone with more brains than a sea sponge could guess, a couple people jump on the fact that a second Catholic - that's C-A-T-H-O-L-I-C - school had fired an openly gay teacher.  Pretty darn hateful wouldn't you say?  Clearly compromising the clear teaching about unconditional love, right?

Those trying to pour water on the firestorm that Mark ignited jumped in to remain consistent, and said that the school, like the Church of Christ in question, had a right to stand on their beliefs.  Mark, however, suddenly looked, well, what can I say?  He was pithy and didn't go into detail, but you can see the problem.  For no other reason than this was a C-A-T-H-O-L-I-C school it is OK.  The teacher could have, well, lied maybe?  I don't know what he meant.  But clearly the school was a mother-beautiful example of Christ like love and firm standing on clear teachings passed down from the apostles.  Not like that evil Church of Christ that, according to CNN (which is always true and trustworthy), asked a woman who openly opposed the church's teachings to leave.

That kiddies is what is known as "Superior-by-Catholic."  It's really a stereotype used by non-Catholics, but clearly there is a basis for it.  The idea is that if anyone else does it, even if it's the slightest deviation from holiness, it's just not good enough!  But if Catholics or the Catholic Church is a million times worse, well shucks, we're all just crazy sinners, and besides, those standards don't even apply to the Church since it's obviously right.  Again, for most Catholics, that's an unfair stereotype.  It's certainly not taught by the Church in any documents I've found.  And it shouldn't be the M.O. of a serious Catholic apologist.  But on the Internet, across the Catholic blogosphere, alas it's not hard to see where it came from.  And nothing demonstrates that bizarre expression of non-Traditionalist Catholic Fundamentalism than Mark's condemnation of a Church for doing 10 of what he gladly excuses a Catholic school for doing 10,000 of earlier in the year.

Yes, I know someone could argue that this was different, it was only a school as opposed to an actual church, missing the obvious fact that a church in Evangelical Christianity might be different in form and nature than a Catholic Church.  But then you'd have to wonder what all the hubbub was about when it came to asking mere Catholic schools to pay for Sandra Fluke's birth control, correct?  Well, not so fast!

See where bad apologetics gets you?  Bozo time, and just the kind of thing that makes critics of Christianity and Religion in general drool over what appears to be a clear inconsistency in standards and belief.
Posted by David Griffey at 8:31 PM