Beowulf has been played 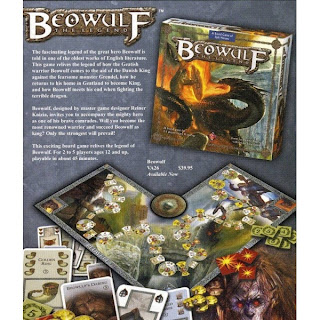 And found fun!  It took years, and I mean years, to finally get this game and figure out the rules.  One night my wife and I decided to go downstairs where the bulk of the homeschooling takes place.  We got out a couple games while the boys were upstairs watching a movie, and my Mom went to bed early (she's been having some issues lately, and has been resting more than normal).  We then decided to get out the same game I mentioned last Christmas.  It's the 'one we haven't played at all.'  Well, we played it and you know what? It was fun in a rather awesome yet simply way.

The myriad pieces and strange design of the game board was a bit daunting, and probably the reason I hadn't put it down on a table before now.  It's from the same company that made the equally enjoyable, but mightily frustrating, Lord of the Rings trivia game, based not on Jackson's' movie but on the actual book.  I know Lord of the Rings, but felt like an idiot with that game.

The artwork by the always impressive John Howe adds some weight to the product.  But basically, it's a card game romp through a series of minor challenges, typically involving cards and bluffing, based around the key events in Beowulf's fictional adventures.  The cards and challenges reflect this, getting a sword here or a blessing from Hrothgar there.  But it's all basically an elaborate card game with playing pieces.

Still, the artwork, the literary references, the attention to detail and clear desire by the game makers to be faithful to the story in theme, if not in substance, made it surprisingly enjoyable.  When we played it with the boys, they were overjoyed and came away with thumbs-up all around.  That could be because I got trounced, but I'd like to think it was because all those bedtime stories about Beowulf and Grendel that I used to tell them finally came back to life in a refreshing way.
Posted by David Griffey at 11:14 PM