One of the powers of Liberalism 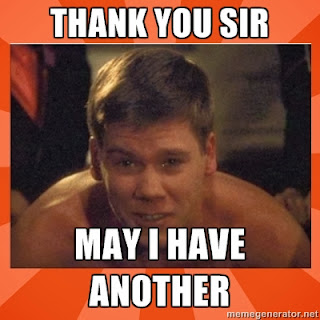 Has been in the warped and twisted perversion of the age old Christian adage that confession is good for the soul.  So we have white, European and American heterosexual Christian men admitting that those in their lineage have, at divers times, done bad things.  Like genocide, imperialism, slavery, persecution, bigotry - all the things that most cultures and civilizations and beliefs have, to some degree or another, struggled with.

Problem?  We keep emphasizing it.  Over.  And over.  And over.  And because of this, there is a tendency within that aforesaid grouping to jump on board and demonstrate our righteousness by pounding our shoes on the table and affirming the eternal sinfulness of 'Us.'  That is, of White European American Heterosexual Christian Men.

So it's really tough to look back at anything associated with this heritage since so many who are part of it take such glee in standing up among the crowd, grabbing the megaphone, and trying to out-trash anyone else in the almost morally masochistic hyper-criticism of our own ancestors and their accomplishments.

I say this because we just returned from a family vacation from Williamsburg, VA.  Thanks to a large tax return from last year that some might say was spent frivolously on such a thing when our family is in such straights, we learned a few things about how this little distinctive of the Modern West has settled into the common consciousness of society, and is much enjoyed by forces of the revolution known as Liberalism (or progressivism, Left, whatever).  I'll say more about it, and our trip and why we took it and what we saw in the days to come.

But never have I realized more just how that tendency that has settled into the minds of the Christian West has become a tool for destroying every fabric of the Christian West.  Thomas McDonald touches on it in this wonderful post.  It is a truth deep down at the heart of the crumbling away of the Civilization, if not the Faith, that the Church Built. And also, if I may be so bold, at the heart of the struggle that the Church, and all of Christianity, finds itself engaged in today.
Posted by David Griffey at 5:31 PM

Email ThisBlogThis!Share to TwitterShare to FacebookShare to Pinterest
Labels: Triumph of the Left