DCS shows why we home school 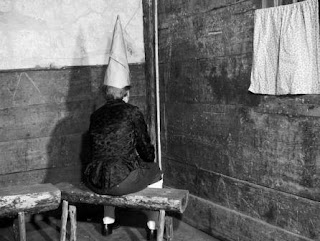 Ten years ago we kicked around the idea of homeschooling.  But to be honest, back then it didn't have the best reputation.  Reading Mark Shea got me to kick it around more, since Mark seemed to have an almost idyllic setting with his homeschooled kids, stay at home wife, and his own domestic vocation.  As times evolved, and the public schools unraveled, I became concerned that my boys weren't being educated.  And there were many reasons we could pinpoint.  Problem was, I have a degree in Secondary Education, and have taught adults.  But I was not ready to teach elementary level, and at that time, I was the stay at home and my wife worked.

Even so, before her position was cut, we began seriously to consider homeschooling.  And the main catalyst, the primary issue, was the treatment our second son got by the schools, and the resulting conversations that took place.  Our boys always did well in school growing up, but he was designated as "gifted".  I never particularly like that, because we felt all the boys, if not all kids, are gifted in some ways.  But we went with it.  From early on, he was set aside with a group of students of like capabilities. They went through several years together, being pulled out of class and given special instruction.

When they went to our intermediate school (itself with myriad problems), he was in a scheduled team along with the other gifted students.  He continued to impress, scoring high on his standardized tests and getting As straight across the board.  He particularly loved science, and talked of being a geologist.  We actually got him things revolving around geology and astronomy for his birthdays.  In 4th grade, he took a standardized test administered to high school freshmen, and outscored over 70% of 9th graders that took the same test.  He was good.  He was very good.

And then my Dad died.  During that time, they had another round of tests, called the Terra Nova tests.  Because of the stress and strain, he didn't do as well as he normally did.  He didn't do badly, just not as well as normal.  He stilled aced the science part, scoring 98%, and getting one of the highest scores in his grade.  But he still didn't do as well overall.

Nonetheless, his scores were good enough to place him in the honors Math program when he advanced to 7th grade.  But he was booted from the Honors Science class, known as the Advanced Science Program for gifted students.  How could that be?  He did worse in his math and had one of the highest scores in his grade in science.   He had a better science grade than some of his friends who were in the class. My oldest had also gotten As in science and almost all As through school, but hadn't been able to be in the program because of his science score on the tests.  What was going on?

Well, we were told, it was because of metrics. You see, the Science program was part of a different state funded category, and required different standards than the Math, which was simply based on test scores and grades.  To get the state funding, the schools had to develop 'a plan', and that had to include a metric for evaluation.  The state didn't develop it, each school district did. But the district had to have one.  And Delaware's was that a particular score was required in both science and math.  He made the science, but missed the math, even if it was good enough for the Honors Math class.  And because no attention was given to grades, that was it.

The problem was, not only did he miss out on that class, but his schedule had to be recalculated, with him being pulled from those friends he had spent years with.  As they went on science field trips and special retreats, he was left behind.

I took it to the person in charge of the gifted program.  I took it to the principal of the school. I went to the members of the school board and superintendent.  But no dice.  I was told that's how the ball bounces, sometimes life depends on a single moment.  They offered him the chance to retake the tests, but he dug in his heels.  What about my grades?, he asked.  How about straight As my whole life?  Didn't matter they said.  When I objected that this suggests his grades in school didn't matter, the head of the gifted program told me they didn't.  That crushed my son.  I objected and told the superintendent what I'd been told.  And he more or less confirmed that they didn't.  According to him, if it wasn't for military academies, we'd do away with grades.  After all, he said, we don't think all those kids who are getting As are really getting As do we?  Because I was focused on the issue at hand, I didn't pursue what he meant by that. But I have a feeling I know.

So my boy was tossed out of the pack, left to stand on the sidelines and watch all his friends continue on together.  His grades unraveled.  So did the grades of my boys.  When I met with his teachers in the fall, they said they felt he was capable of more.  I told them the story.  Most of them hung their heads.  I said it was difficult to tell him to improve his grades since he would gleefully look back and me and say, "I'm sorry Dad, did someone say grades matter?"

The other boys lost their gumption as well. My oldest had already struggled in high school for other reasons.  But this just confirmed to them that it didn't matter.  Plus, our observation was that despite their getting As, they didn't seem to be as 'educated' as you would expect for all-A students.

So it was that, despite the complete upheaval in our lives, despite surviving on a thread, we decided to go all out and go for broke and give our sons an education better than they were getting, and one in which, hopefully, they will feel the reward for a job well done.   With that, I have to say, it comes with a little gloating to see on the local and Columbus news that, in light of an evaluation of the Delaware City School district, in addition to getting an overall grade that was lower than expected, the Gifted Program at DCS received a whopping - hold on for it - F!  Yep.  And F grade.  Now we know.  I just wish this would have happened years ago.  Part of me so wants to write to the schools and say 'told you so!'  It's too bad my boys  had to be thrown under the bus before they figured it out.
Posted by David Griffey at 8:45 AM

Email ThisBlogThis!Share to TwitterShare to FacebookShare to Pinterest
Labels: Homeschooling