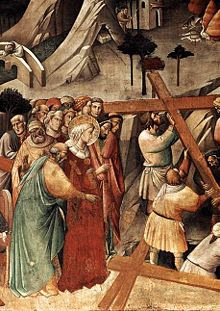 That's the Exaltation of the Holy Cross to you and me.  It's not easy being Catholic in a post-modern world, one which was inherited from a largely Protestant dominated society before it became decidedly secularized and increasingly hostile to all traditional faiths.  Because of this, one realizes that being Catholic today is a little like being Protestant.  You go to Church, you  take part in Church functions, you hang with fellow believers. But then you go to work, watch the game on TV, watch movies and TV shows, play video games, collect stamps, or whatever.

During Lent and Eastertide, things heat up and during that time of year, I think we're closer to what it would have been like growing up in a pre-modern Catholic culture as you're going to get.  The rest of the year, outside of the Church, your own faith doesn't stand out among people of other faiths and traditions trying to navigate the currents of a post-Christian, if not post-religious, age.

As a result of this, and this could be more common in our neck of the world than in other cultures, much of the "year round Catholic calendar" is lost, at least on a communal level.  Individually we may remember a particular Saint day, and there is always the odd Holy Day of Obligation or possibly a group that gathers around a certain spiritual discipline.  But it's not as if the entire national Church puts following the Saints and the Holy Days right up there in our common faces.  One might actually go days or weeks and be all but unaware that any of the days had any meaning at all.  If they do know, it's because they've done the footwork.  Someday I'll write about Catholicism as college classroom.

Maybe it was like that all those ages ago, but I don't think so.  Part of it has been the loss of a Christian common language, which results from the Christian common culture.  After all, up to a couple decades ago, you could reference Prodigal Son, the Burning Bush, the Patience of Job, or any one of a thousand off handed references to a biblical tale or individual, and most in your surroundings would get it.  Read literature from the 19th century and before.  References to other literary works abound, as do references to Christian and biblical terms and concepts.  Today?  When was the last time a person in casual conversation referenced such a thing?  If you did, half the audience would scratch its head. 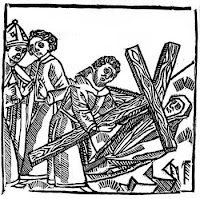 As one travels farther back in time, the Christianization of Culture was no doubt more profound.  It's probably not an exaggeration to say that not every Medieval peasant was a devout follower of Jesus.  But the trappings of the faith, including biblical stories and heroes, saints, holy days, and others were like the federal holidays, shopping days, sports days, and Oscar nights of our nation today.  A day like Roodmas, if it was celebrated at all, would have been known about and anticipated, if not celebrated and spoken about for all to hear.  It would have been yet one more thing that bound all believers together.  Protestantism helped do away with that.  The Enlightenment and age of Reason tossed more of it aside.  Multiculturalism has played a part.  And our general secularized, materialized world has also had a say.  So that, like others, I'll bet I'm not the only Christian or Catholic who missed that yesterday was a day that once would have been lifted up, if not on the same level as Easter or Christmas in the olden days, then at least on the same level as a President's day furniture sale today.
Posted by David Griffey at 6:54 PM