Some thoughts for corporate interests on this Labor Day 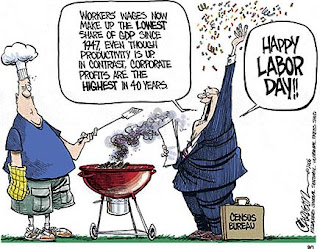 We were watching a cooking show the other day.  Didn't watch much of it.  Those don't interest me.  I just stopped because he was making what looked like a scrumptious pizza old world style.  Turns out the show has to do with some expert taking a failed restaurant and turning it around.  He was telling the owner how to make this pizza.  And what did he tell him?  He told him how to do it so it looks like he's giving the customer more than the costumer is actually getting.  It would save him some money that way.  As my wife and I went shopping for our annual cook out, and noticed prices inching upward while quantity seemed to be dwindling, that got me to thinking, as I am wont to do.

I thought about one of the pitfalls of capitalism.  That's the tendency, often echoed on venues like FOX News or talk radio, to believe that the solution to our problems is found in getting government out of the way and turning things over to people who want to make money more than anything in the world.  Literally.  Turn it over to people interested in making a profit and all will be well (see 1 Timothy 6:10 for possible rebuttal).  And in a culture where people are informed by other forces (like, say, Christian morality), that might be true.  But I'm one who believes that the person you are in the bedroom is the person you are in the board room.  If we as a society have said that in certain areas (the bedroom), there is no morality or values, it's all about what I want for me first of all, I'll  bet people will take that attitude to the board room when they're finished doing whatever it is they're doing in the bedroom.

And it's not been for the best either.  Let's face it, 'good old American craftsmanship' is now used sarcastically, not to mean anything positive.  We won't even discuss stagnant wages against corporate earnings, dwindling quantities at higher prices, and outsourcing to third world countries while jacking up prices at home.  And while many blame government regulations for all woes, I can't help but think the result of government mischief doesn't have to be buying a bag of air with some free potato chips thrown in while the corporate CEO and stockholders increase their personal bottom lines.  Somehow, some way, the machine has broken down.  I'm not saying, "Quick, turn it over to the government!"  But I am saying those who don't want the government involved have to step in and admit there are problems beyond this or that regulation.  The problems may go deep to the heart of our society, a society capable of corrupting anything no matter how beneficial in theory. Just a thought.  Here are some of the Church's thoughts on the subject:

IV. ECONOMIC ACTIVITY AND SOCIAL JUSTICE
2426 The development of economic activity and growth in production are meant to provide for the needs of human beings. Economic life is not meant solely to multiply goods produced and increase profit or power; it is ordered first of all to the service of persons, of the whole man, and of the entire human community. Economic activity, conducted according to its own proper methods, is to be exercised within the limits of the moral order, in keeping with social justice so as to correspond to God's plan for man.209
2427 Human work proceeds directly from persons created in the image of God and called to prolong the work of creation by subduing the earth, both with and for one another.210 Hence work is a duty: "If any one will not work, let him not eat."211 Work honors the Creator's gifts and the talents received from him. It can also be redemptive. By enduring the hardship of work212 in union with Jesus, the carpenter of Nazareth and the one crucified on Calvary, man collaborates in a certain fashion with the Son of God in his redemptive work. He shows himself to be a disciple of Christ by carrying the cross, daily, in the work he is called to accomplish.213 Work can be a means of sanctification and a way of animating earthly realities with the Spirit of Christ.
2428 In work, the person exercises and fulfills in part the potential inscribed in his nature. The primordial value of labor stems from man himself, its author and its beneficiary. Work is for man, not man for work.214
Everyone should be able to draw from work the means of providing for his life and that of his family, and of serving the human community.
2429 Everyone has the right of economic initiative; everyone should make legitimate use of his talents to contribute to the abundance that will benefit all and to harvest the just fruits of his labor. He should seek to observe regulations issued by legitimate authority for the sake of the common good.215
2430 Economic life brings into play different interests, often opposed to one another. This explains why the conflicts that characterize it arise.216 Efforts should be made to reduce these conflicts by negotiation that respects the rights and duties of each social partner: those responsible for business enterprises, representatives of wage- earners (for example, trade unions), and public authorities when appropriate.
2431 The responsibility of the state. "Economic activity, especially the activity of a market economy, cannot be conducted in an institutional, juridical, or political vacuum. On the contrary, it presupposes sure guarantees of individual freedom and private property, as well as a stable currency and efficient public services. Hence the principal task of the state is to guarantee this security, so that those who work and produce can enjoy the fruits of their labors and thus feel encouraged to work efficiently and honestly. . . . Another task of the state is that of overseeing and directing the exercise of human rights in the economic sector. However, primary responsibility in this area belongs not to the state but to individuals and to the various groups and associations which make up society."217
2432 Those responsible for business enterprises are responsible to society for the economic and ecological effects of their operations.218 They have an obligation to consider the good of persons and not only the increase of profits. Profits are necessary, however. They make possible the investments that ensure the future of a business and they guarantee employment.
2433 Access to employment and to professions must be open to all without unjust discrimination: men and women, healthy and disabled, natives and immigrants.219 For its part society should, according to circumstances, help citizens find work and employment.220
2434 A just wage is the legitimate fruit of work. To refuse or withhold it can be a grave injustice.221 In determining fair pay both the needs and the contributions of each person must be taken into account. "Remuneration for work should guarantee man the opportunity to provide a dignified livelihood for himself and his family on the material, social, cultural and spiritual level, taking into account the role and the productivity of each, the state of the business, and the common good."222 Agreement between the parties is not sufficient to justify morally the amount to be received in wages.
2435 Recourse to a strike is morally legitimate when it cannot be avoided, or at least when it is necessary to obtain a proportionate benefit. It becomes morally unacceptable when accompanied by violence, or when objectives are included that are not directly linked to working conditions or are contrary to the common good.
2436 It is unjust not to pay the social security contributions required by legitimate authority.
Unemployment almost always wounds its victim's dignity and threatens the equilibrium of his life. Besides the harm done to him personally, it entails many risks for his family.223