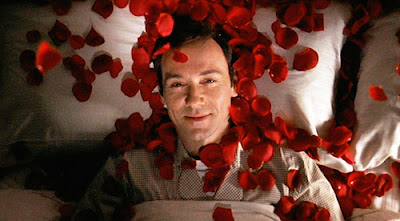 I've told my boys if you want to understand liberalism, watch the movie American Beauty 10 times.  You'll have all you need to know.  It is the Triumph of the Will of the post-Christian manifestation of liberalism.  It has all the tropes.  The voyeuristic drug dealing dropout rebel who's kind and enlightened and brilliant.  The young sex charged daughter who dutifully hates her family and breaks the most important Commandment to break: the Fourth.  The hypocritical, shallow and laughable facade of a family in the suburban home, with a father who can't keep his hands off his own genitals, and a wife who runs the family and can't keep her hands off anyone else's genitals.  Dad is also slowly inspired to improve himself in order to live out his fantasies of sex with the underage cheerleader friend of his daughter.

Meanwhile, dear old Dad quits his job and goes for the fast food employment line while getting his only inspiration from the neighborhood homosexuals who are athletic, witty, kind, tolerant, fashionable, insightful and as close to perfection as you're going to get this side of the cross.

And the parents of our voyeuristic drug dealing hero?  Why, that Dad is a repressed homophobe who collects guns and venerates Hitler.  He's uneducated and boorish.  He beats his hapless wife and his son, but does it because he secretly desires hot, steamy sex with the fellow next door.  When this isn't realize, he must murder as all who suppress their homosexual desires must.

It's all you need to know about how modern liberals view liberalism and how they view those who don't conform. I say this because I'm in an ongoing discussion with a fellow on the thread I wrote about yesterday.  Nice enough fellow, but one who has made it clear that bigotry is defined by not accepting same sex relationships.  I've merely asked upon what authority or source he bases his claim that same sex relationships are entirely ethical.  After three comments, he has yet to answer that, appealing to the Golden Rule and a not-too-subtle 'cuz it's obviously true, duh' sort of fundamental assuredness.  And in the middle of it, he keeps throwing out some pretty humorous nods to the fact that the problem must be me: I might be ignorant, the victim of horrific relationships, in a marriage that might need an equal amount of condemnation (because nobody ever doubted that my marriage and gay marriage were on the same page).  It's amusing, in a sort of 'Big Brother on the March' sort of way.  Again, living out the American Beauty dream, with a little help from our friends and host at CAEI.
Posted by David Griffey at 4:28 PM