To embrace the Left

Is to embrace the lies and deplorable arguments required to defend the Left.

I've stopped following the page that monitors Catholics on Twitter because I'm more and more convinced that Twitter is of the Devil.  I know there can be good people who post good things on Twitter, but the bad far outweighs the good from what I've seen.

Nonetheless, one individual I will check on is deacon and film critic Steven Greydanus, simply because I continue to watch in amazement as he has descended deeper and deeper into the shadows of the Leftwing pit.  Things I know he once would have condemned, or arguments he rightly would have laughed at, are now his stock and store.

He and I used to have some pretty good discussions back in the day. While we didn't always agree, he was respectful and had little tolerance for lousy or lame arguments that were used to make a Social Media point.  Of course he was also against the name calling and calumny that defines so much online discourse.  That made debating things with him a pleasure, even if I never thought much of him as a film critic.

I say all of this because: 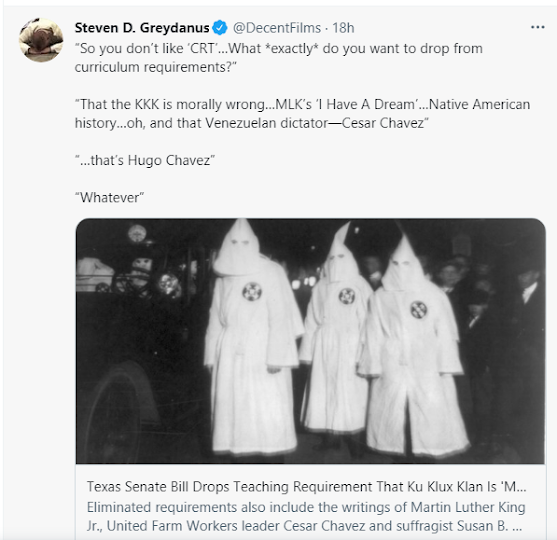 His source is a Huffington Post piece - which should raise a thousand alarms right there - about how Texas Republicans are banning the teaching of evil and good.  They are literally saying schools can no longer teach the KKK is bad or mention MLK, at least according to the HP hit piece.

Which is false of course. And not just false, but head-up-a-donkey's butt idiotic lies.  You would have to be some special level of partisan dumb to think that's what this or any major bill would seek to accomplish.  It's nothing but the old trick of  saying 'Republicans won't teach that Stalin was a bad man' while failing to mention it's because they won't promote the policies and ideologies of Hitler, who said Stalin was a bad man.

It wasn't easy to find, but if you dig a bit you can see what is happening.  The Texas GOP is going after the racist based Critical Race Theory that alternately does and doesn't exist based on the moment, and is founded on the principle that going to a pre-WWII approach to sizing people up and judging them based on group identities including, but not limited to, skin color and ethnicity is the only way to go. Sane people of virtue and common sense see CRT for the evil stupidity that it is.

FWIW, here is an alternate view over at FOX. I unusually don't reference FOX for more than fluff or trivial pieces, but  I had to go there in order to see almost any attempt in our propaganda ministry national press to ask the Texas Republicans their point of view.  Most outlets seemed happy to take the HP's 'GOP wants to praise the KKK and Nazis' narrative as gospel truth because, well, of course they do.

The emergent Left is a grave evil, a sort of 'History's evils' greatest hits.'  It poisons everything, including deacons of good will who once would have recognized and condemned the lies and evils used here in order to perpetrate even greater lies and evils, but who now must support the same.

Email ThisBlogThis!Share to TwitterShare to FacebookShare to Pinterest
Labels: the Joy of Racism on the Left, The New Racism and the Catholic Left, The Party of Lies