A merry Fourth of July

So we had a fine July 4th weekend.  The delay in posting is owing to duties in life.  Nonetheless, given the rarity of such gatherings now, I figured it was past due for a posting.  As I've said, it's tougher and tougher to get the whole family together for these things, as it should be.  The older boys are all moving on in their respective journeys.  When they can, they get together and we make the best of it.

We had a sort of reprieve from the usual sunrise/sunset of raising kids last year when the lockdowns hit.  Living with my 90 year old mom had us self-quarantining long before the rest of the world did.  And we didn't really relax that imposition for most of the year.  The boys agreed, and went ahead and took online classes and hunkered down for most of when they could.

This year, however, things are at least trying to get back to normal.  While our oldest is in school for the long haul - eyeing a doctoral degree and an academic career - the other two are moving on in more immediate ventures.  They're still home.  Their philosophy is to move out when they need to; when a job, or a distant school, or marriage compels them to move out.  It dawned on them that for most of history people moved out because they had to, not just to move next door and live alone in order to move next door and live alone.

As one adroitly pointed out, the whole 'I'll move out to live by myself just because' was a phenomenon of the 20th century and, to be brutally honest, not a Christian values driven one.  Quite frankly it often war born of the desire to be able to live a life that wasn't conducive to having mom and dad around, if you get my drift.  And while a comprehensive set of statistics on such developments can be difficult to amass, given what I know of my own family and when my parents and their parents left home, it all seems to fit into that observation.  Even returning from the war, my uncles moved back into my grandparents' homes until they needed to move out, not just to move out.

And in this day of changing social structures and shifting economic fortunes, that seems wise to me.  So far my second youngest is wrapping up his first degree and my oldest is planning on graduate school.  Between them and their grants and scholarships, having stayed at home, they owe $0.00 in college debt.   My third oldest son, who chafes at the idea of paying modern colleges a nickel, plans on moving up the corporate ladder until such time as a college degree, if needed at all, will consist of a small part of his overall income.   Our youngest son is still too young to make the call, and who knows what will be needed by the time he's college age?

With all that, they were still able to get together this July 4th, the second big day in our half of the year.  It was also special because we all, including my mom, had a chance to meet our second son's 'significant other's' family.  I wouldn't say they're ready to pick out curtains, but it's getting to the point they felt it was time for the parents to meet.  July 4th at the local fireworks seemed a nice neutral ground.   All parents can be leery of who their children date, but so far I'm pleased with her.  Sporting a Cheshire Cat grin and solid set of values, her parents insisted on meeting my son and giving him the once over before letting her go out, despite her being an adult.  That was a bonus point in my book.  The night meeting them reinforced the already positive views I had developed.

The other two boys are, at this point, in their bachelor mode.  My oldest son will likely need a girl to propose to him.  My third oldest is of the kind to throw himself 180% into what he's doing, and if that doesn't include worrying about social life for the time being, he'll get around to it when he does.  Right now, having become a manager at the ripe age of 20, his focus is moving to the next level and working whatever extra hours (and getting the subsequent extra money) it takes without worrying about other entanglements.  Our youngest, again, is a bit out of these particular concerns.

We still did a little smoker and fireworks setting off a couple days later here at the homestead.  We had to wait for then because our youngest insisted it be done when all brothers were present.  We left my mom stay indoors that night because of the heat and the adverse effect that has on her.  She was able to watch from her bedroom window.  But we were all still there, for the time.  And as always when the family can get together, it's a fine time. 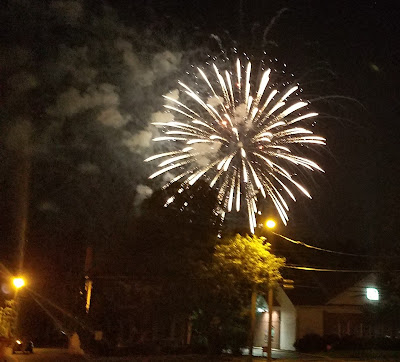 For a relatively smaller town, we have an impressive fireworks display every year. 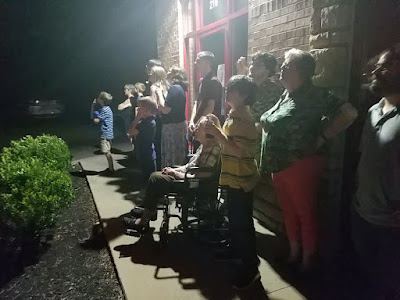 Both of our families, and some stragglers, lined up against the wall to watch the display.  Her parents are from Canada, and they hadn't attended a fireworks display on July 4th.  They were impressed. 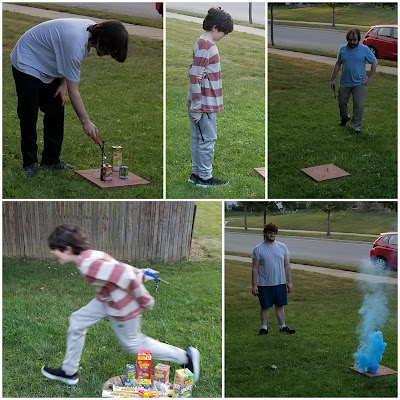 The boys setting off a series of smokers just to add color to the festivities, even if it was two days after the holiday proper. 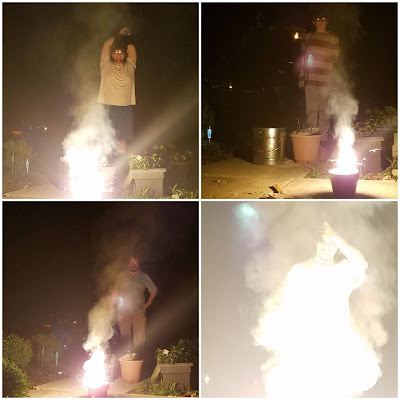 That same night as the smokers we put on one of our Independence Day spectacular lights displays using various resources we won't get into. This year even our youngest was able to do his part on his own, though a decision to put a vegetable garden in our front cut down on space.  Nonetheless, they improvised nicely and made our yard light up for the celebrations. 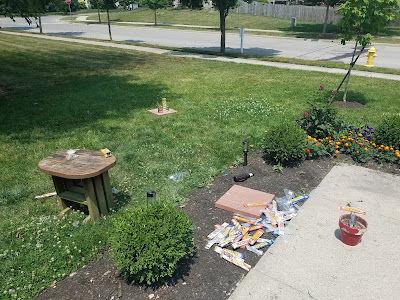 The day after.  Call me strange, but I've always had a certain affinity for the day after major holidays - Christmas, Easter, Thanksgiving, Halloween, July 4th.  There's something about coming out and seeing the next day after all the fun of the previous night is processed. Was a time that the previous Independence Day home fire and lights display left refuse that took an hour to clean up.  It was nowhere near that now.  Again, times change. Hence enjoy those times when they happen.
Posted by David Griffey at 5:00 AM