Did I mention those New Prolife Catholics who hate homeschool?

So apparently this happened: 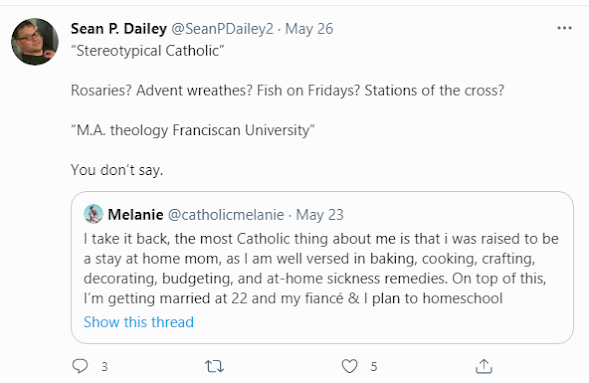 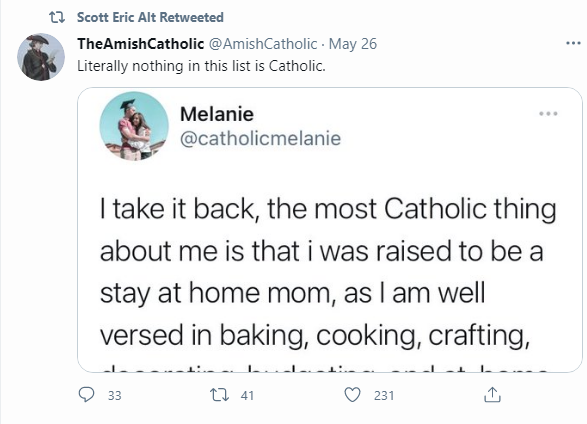 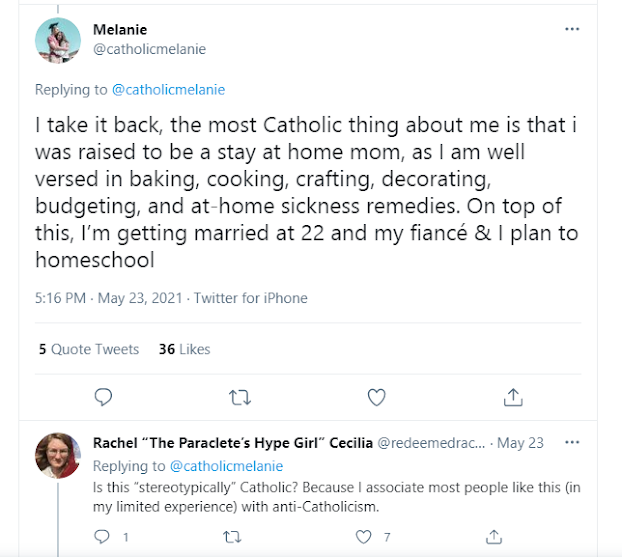 I don't get it.  What exactly did Melanie say that was so awful?  Baking is a Catholic mom thing?  Granted, we could debate the accuracy of saying such things are the most Catholic things you could do.  And ol'Rachel is correct.  As a former non-Catholic and non-Christian, I can assure you the popular stereotype of Catholic girls isn't staying home baking and homeschooling the kids.

But I get the feeling that whether or not it's correct to label such preferences as uniquely Catholic versus other Catholic distinctives isn't the bone of contention.  I get the impression that the main beef is this part of her tweet:

A stay at home mom, as I am well versed in baking, cooking, crafting, decorating, budgeting and at-home sickness remedies.  On top of this, I'm getting married at 22 and my fiancé & I plan to homeschool.

Something tells me that is the rage-inducing part of what was said.  Not so much the Catholic part, but the setting myself apart in a particular role for the good of my family and children, rather than focusing on my own dreams and aspirations to the exclusion of anyone else in the world who comes in a distant second in my considerations.  After all, some of the reactions almost seem to suggest such a set f priorities would be antithetical to good Catholic living, at least c. 2021.

It's worth noting that in post-modern reality, there is nothing more appalling than a life spent in sacrifice to anything but ourselves and our ambitions. In 1988, I had a philosophy professor who said flat out that a woman who spent her whole life taking care of her family above her own dreams could never be a full person.  The growing number of Catholics who appear to agree is, to me, quite telling.

It's also worth noting that such views are very different from the general Catholic blogosphere attitudes of the early 00s. After all, one of the reasons we chose homeschooling back in 2012 when we saw the rot infecting our local public school system was the witness of Catholic  homeschoolers across St. Blogs.  None other than Mark Shea posted a request for his readers to point me to a good, solid Catholic homeschool curriculum.  There were many who commented and give their own recommendations and support.

I don't know how prevalent pro-homeschooling posts are across his social media sites now, or the Catholic blogosphere in general.  I do know that if I want contempt for homeschoolers, or those trying in some way to reclaim a more pre-post-modern understanding of family, parents, individuals and even the Gospel, I don't need to go much farther on social media than a growing number of New Prolife Catholics social media sites.