The essential role of false presmise for the modern Left

Is demonstrated nowhere better than the latest piece by the good deacon and Catholic film critic Steven Greydanus: 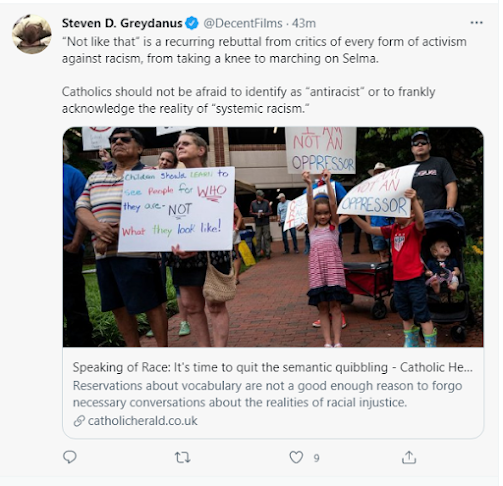 Here's the entire piece.  Note the premise.  There can't be legitimate criticisms of anything done to combat racism, that's how we know how wrong conservatives are for being bothered.  Kudos for his use of Selma; a subtle tactic of the Left to suggest that not a fraction of an inch of progress has happened between Selma and today.  Nonetheless, this sort of claim is one I hear bantered about whenever anyone does anything for any leftist cause.  Any criticism of the methods or tactics is met with the above rebuttal of flawed priorities.

The same was said last year when conservatives were a bit miffed at the thousands of peaceful protesters who left in their wake destruction, arson, desecration of churches, assaults on government buildings, attacks on innocent bystanders and the odd dead body.  Oh yeah?  Well you just keep parsing all these little terms about fighting racism when fighting racism is all that matters (read: the end justifies the means)!  That was a frequent response, just like the one above.

Of course most conservatives I know say that racism is bad, and we don't support it.  And that includes the latest anti-white racism that is has more similarities to a Jim Crow mentality redux than anything close to antiracism.  Conservatives merely object to certain means or methods, often times the very same methods or tactics that the Left will condemn in other occurrences.

The good deacon might be interested to know that what set most people off about Kaepernick was how this followed fast on the evisceration of Tim Tebow for daring to bring politics into the hallowed and sacred world of non-political sports.  The assault on Tebow itself was problematic since many remembered the Left's celebration of such great moments of politicizing sports as the 1968 Olympics black power salute, or the celebrated anti-war protests of Muhammad Ali.  So that it was suddenly bad for Tebow to do the same thing sounded much more like liberals were only upset because it was non-Leftist politics, not politics in general, that was the problem.  The sudden praise and adoration for Kaepernick's leftwing protests supported that suspicion and exposed the naked hypcrisy and double standards.

Likewise, most conservatives I know uphold the right to peacefully gather and lawfully protest. They're not fans of radical protesters who speak ill of America or Americans or wish death on people like police, but they'll usually stop short of saying such protests should be banned.  They will, however, object to riots, to unlawful assaults on innocent people, on vandalizing and destroying and killing, or the naked hypocrisy and double standards applied to non-leftists and ignored for leftists.

That's something they don't like.  Likewise, they found themselves a bit miffed by the number of leftwing advocates - including Catholics - saying that while it's a damn shame innocents died during the BLM riots peaceful protests, their deaths didst glorify the Left, so it's OK. Especially after post-war liberals spend decades preaching that violence is never, ever the answer.

That's what they object to, oh dear deacon.  Not protesting racism. Or parsing trivial terminology. But they do object to how it might be done, as well as hypocrisy in how standards are applied.  I keep hammering Deacon Greydanus because his fall into the leftwing mire of duplicity and subterfuge is one of the more flagrant, because of the good reputation as a mature and fair analyst of current events he used to have.  While I was never a big fan of his post-modern approach to film criticism (anything with leotards and CGI superhero graphics boosts a movie by one letter grade), I found him a man of good faith willing to debate fairly and openly, even when we disagreed.

That's why it came as a shock as he joined the growing number of left aligned believers and accused me of racism for my views on immigration before banning me from his sites.  That has become an all too common tactic for those aligning with this increasingly destructive and anti-American/anti-Christian revolution we're witnessing. Assume the inability to be a non-leftist of good will, make the accusation of grave sin demonstrated by the unwillingness to conform to the Left, and then ban before any defense can be provided.  Perhaps it's necessary.  Goodness knows, many things like false premises and denial of reality seem to be necessary to maintain any semblance of allegiance with the Left.  That is especially true for those trying desperately to keep one foot in the gathering darkness of the Left with the other foot in the light of the Gospel.