A happy birthday to our youngest 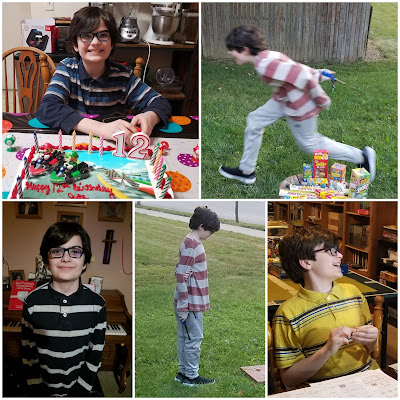 Yes, it's true.  We're on the brink of having no more children younger than teen age.  But not yet.  He's on the brink, however, and his feelings are mixed. Part of him is excited about getting older, and part wishes he could stay young.

When I was his age, I couldn't wait to grow up.  What the hell was I thinking?  But it was in the freewheeling 1970s when anything and everything adults could do was pretty much laid bare on the table for us little'uns to see.  We may think with the Internet things have gotten worse.  No, they've gotten secretive.  In the 1970s, what you go to dark sites on the Internet to find today were on storage shelves and book racks next to Popular Mechanics for all to see.

So there is that.  Our youngest, who we call our 'Little Catholic Gift", has grown up in a world separate from his brothers.  His oldest brother, over fourteen years his senior, grew up in an age at the end of ours, when the last shards of the assumptions that defined my generation were still in effect.  Things were changing, of course.  As they always do.  But the world our oldest grew up in - of God Bless America, Let's agree to disagree, of VCR tapes and CD players, of this new thing called the Internet, and of an only recently post-Cold War world - was far closer to my experience growing up than anything our youngest knows.

To our youngest, most of those things are non-existent to ancient fables and legendary tales.  Including, of course, the idea that our country, our faith traditions, and the values we grew up with are for anything other than disdain and contempt.  With our oldest, we taught him to look past skin color and see people as individuals, all within one human race, never judging based on group identity.  Being in public schools, we had plenty of help in those days, though we noticed a growing tendency for him to see skin color and other identifiers more and more, courtesy of the latest lesson in his grade school text book.

But for our youngest, we have to explain to him that he wasn't born a racist Nazi simply because of his skin color.  That he is not guilty for the sins of everyone who ever had white skin.  That the country in which he was born doesn't deserve to be burned to the ground while people who look like my son should get it in the neck because, well, skin color. That's quite a change.

Plus, there's been shifts to our lives in general.  He was a late arrival in a family of late arrivals.  My mom was the youngest of six children in her family, and I came along almost nine years after my sister, who was born eight years after my parents were married.  It's not surprising, therefore, that my youngest's experience visiting family is limited.  There isn't much family left.  While my three oldest missed out on most of our greater extended family, they still can remember meeting some.  Our youngest never knew any but my mom and dad, and the rarest visit from my wife's parents and sister from Florida or visit to her surviving grandmother.

More than that, my mom moved in with us when my dad died.  Over the years, her age and a clear case of dementia has left her as dementia often does.  Owing to our lives, him being home schooled, and obligations I have or opportunities that come my way, that often leaves him as the main contact to take care of my mom when the rest can't.

That's not easy on him, God bless him.  I explained to my sister that after her divorce, our parents stepped in and helped raise her son.  Likewise, though we lived away from my parents for many years, when we moved to Ohio, they would come down and babysit or watch them when needs arose.  In those crazy years when we became Catholic, sometimes we left them for days at a time as my wife and I scrambled to find income any way we could.

But while her son and our oldest were raised by and cared for by their grandparents, our youngest has had to help care for for his grandma.  And it isn't easy.  Anyone who has been a caregiver for an elderly parent, even without dementia, knows how taxing it is.  Add the dementia element, and it can be more than tough.  Yet he handles it like a trooper.  If he gets al little exasperated at times, at the ripe age of pre-teen, I'd say he's more than earned his room and board.

He helps her, gets her meals when we aren't available, and generally watches to make sure she's OK.  Despite it all, he's still as close to her as any of the boys and makes sure he takes time out of his days to spend time with her - something I think continues to help her in a very positive way. If he still sleeps with his stuffed dog he got when he was a baby, I let it slide.  Given what he's had to contend with, I'll leave him what shards of childhood he can hold onto while he can.

So here's to a happy and blessed birthday and year for him. He's in many ways pre-teen going on twenty five in his life's experiences.  I get that he's not some poor kid in a third world country, but he's not had an easy walk either.  It's helped him, of course, and he can hold his own in a household of adults with the best of them.  May God bless him and the upcoming year in even the smallest amount of how much he blesses us.

Oh, and for his birthday dinner, we asked what he wanted - family tradition: birthday celebrant gets to choose.  He said McDonalds.  We said that's fine, but we thought he might want something a little more 'special.'  So he said OK, homemade McDonalds.  Since our oldest's first job was at McDonald, he took what he remembered there and found substitute recipes to make a dinner of burgers, nuggets, fries and even Big Macs.

And you know what?  Though we couldn't' find small buns for the Big Macs, making them larger than they should have been, it worked.  Closing our eyes, we couldn't taste a bit of difference.  Hopefully that and all the things that went with his birthday made it worthy of what he brings to our family.

By the way, eating a Big Mac twice the size of a normal Big Mac is like eating rocks. It took me until dinner the next day before I was able to eat anything else.

Email ThisBlogThis!Share to TwitterShare to FacebookShare to Pinterest
Labels: Important things, Prayers, Thanksgiving to God, the Boys, The Family