One reason I know Critical Race Theory is evil

Beyond its endorsing of racial profiling that has - surprise - been so long condemned by the Left, is the growing number of defenders resorting to stupid lies and contradictory denials of the obvious needed to defend it.  So this: 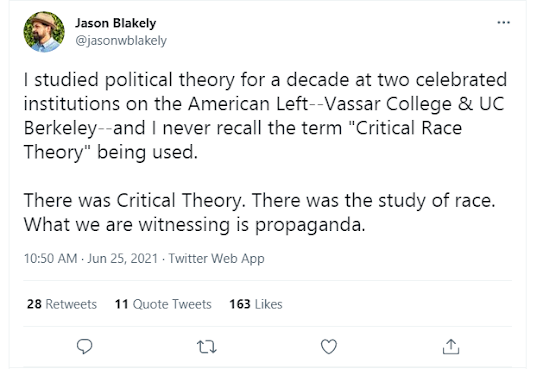 I've seen a growing number of supporters of Critical Race Theory declaring variations on 'there is no CRT', though not as flagrantly as this.  It took me all of 5 seconds to find this, an article in Education Week explaining what Critical Race Theory is, its origins, when it gained legal grounding, and on and on. In short, it exists, and exists by name.  We just had the first school board in our neck of the woods try to implement CRT by name in their schools, meeting with the same pushback from parents of all ethnic identities.

As if that isn't enough, and by golly it ought to be, we have this gem from the always unbiased and reliable Washington Post:

The basic problem for most, however, is simple: CRT (existing for the WP, not existing for the good Mr. Blakely) lumps everyone into monolithic ethnic groups and sizes them up for differing treatment accordingly.  All blacks are hopelessly oppressed with no recourse but to be hopelessly oppressed, while all whiteskins are ispo facto racist (you can tell by their skin color), and blood guilty of all white sin ever committed  That's why sane people oppose it.  Ask anyone out there, and they'll give variations of those reasons in so many words.

To resort to 'there's no such thing as a naked emperor', as those on the Left have done about leftwing extremism, black on white violence, Antifa, pro-abortion celebrations, and other inconvenient realities, suggests strongly that their designs are evil because they can't defend their designs.  Instead, they must deny them against all evidence to the contrary, and hope for the lie to be enough to support the cause they're lying to support, all while attacking those who see the lie for what it is.

You can tell a tree by the fruit it bears, or so we're told.  Sometimes, you can tell the fruit by the tree that bore it as well.  When the tree is a growth of lies and falsehoods and slander easily debunked, there's a good chance the fruit it is attempting to bear is no better.

Email ThisBlogThis!Share to TwitterShare to FacebookShare to Pinterest
Labels: the Joy of Racism on the Left