My first Facebook block and the trends of our age 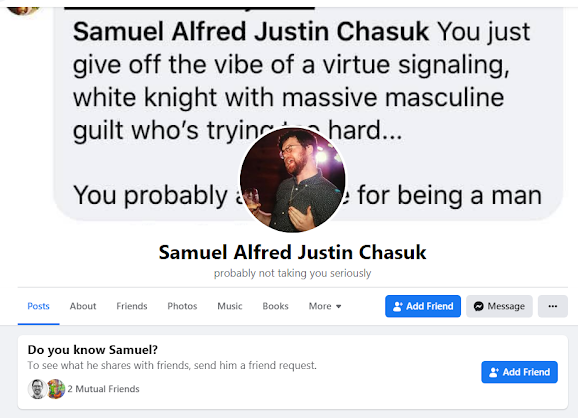 That is the first person I ever blocked on Facebook, and one of only two I've ever blocked/banned since I began on Social Media.  He was a fellow who seems to be a somewhat moderate Catholic and who trolls Mark Brumley's FB page.  He had trolled others and me before on a host of issues.  The final straw was dealing with this article by Deacon Greydanus I posted on some time back.

It being FB, I gave just one example of why Deacon Greydanus was wrong, and many objections to the Left's approach to racism have substance and are not semantic quibbling.  I picked the Kaepernick protests since I'm versed on those, and remember why so many made clear they were bothered - chief reason being the naked hypocrisy of those lifting up Kaepernick who only recently trashed Tebow for daring to breach the hallowed halls of sports with vile politics.

Mr. Chasuk did what he always does, and that's troll.  This was done largely by repeating bilge, a few insults and personal digs, and the not too subtle suggestion that my problem is black people. I initially thought I could spell it out that charging 'semantic quibbling' doesn't apply when people explain exactly why they have a problem with something, and that explanation involves matters of substance.  And furthermore, the reason - duplicity, denial, hypocrisy used to advance and agenda with which they reject on factual grounds - is more than any definition of quibbling.  That went nowhere, and resulted in more trolling, name calling, accusations, dismissal of basic Church teaching 101 and the works.  So I blocked him.  Only one of two times I have ever blocked or banned someone from anything, and here is why him and not other trolls I've run into over the years.

Mr. Chasuk appears about millennial age, and demonstrates many of the more baleful aspects of that particular generation.  Beyond being a troll, he exhibits the characteristic disdain for history, ir not reality in general.  Like those millennial trolls at Patheos, he was fond of invoking the old 'that's a right fine narrative about liberals being against censorship back in the day, but can we ever really know they were against censorship?  Maybe they rejoiced in censorship?  Maybe CAT spells Dog?  Can anyone know anything of the past' trick.  That's just your version of reality after all.'

Worse, however, is something that I wanted to touch base on when I broke my ban on linking to Mark Shea's website a few weeks back.  I got waylaid from my point when Mark lamented to his readers my unwillingness to speak to him directly.  After multiple attempts at speaking to him directly that were cleverly foiled by Mark, I gave up.  But that sort of sidelined the greater point.

The point I was going to bring up was looking beyond Mark's partisan call for all people who would consider themselves good to vote Democrat while calling for the destruction of the GOP.  Yeah, that's political zealotry of the first order.  Nonetheless, for all its lockstep devotion to the Party, I'm sure Mark would be appalled if you suggested he was calling for Republicans to be killed.  Like calling for the NRA, or Gun Cult, or the GOP to be wiped out by the State or by God, Mark doesn't mean actually killing those in such groups.  He means the groups must go.  I can imagine his rage at anyone suggesting otherwise.

But you know what?  I've noticed such distinctions are generational on the Left, not universal.  Remember the Parkland shooting heroes?  That is, those students and youth celebrated by the press who rose up to become the March of Heroism against the plague of gun violence in our nation?  Where did they go?  Long before Covid, they had fallen off the radar.

True, the media is like that.  Journalism is like a kid with a toy at Christmas.  At first it's all the rage, but most of the time by the end of the year it's old news. But the speed with which most of the youth were shuffled away versus the degree to which they were initially lifted up by the press was interesting.

It's been my hunch that a growing number of those youth began making troubling statements about gun owners and gun rights advocates that the press just couldn't downplay.  Like Mark, those young activists had no problem saying the NRA should be destroyed.  Unlike Mark, however, some had no problem saying how the NRA should be destroyed  - namely with their own guns.  Same with gun owners.  I remember a particular tweet that caused a stir when one said he wished gun owners would kill themselves with their own guns..  Likewise, a few months later another Parkland advocate caused a stir by tweeting that he wished a congresswoman who opposed their agenda would be the next victim - along with her family - of the next mass shooting.

This is not Jim Brady's gun control movement.  This is not a movement founded on the idea that peace is ever good and violence is ever bad, therefore guns have to go.  Too many of those young radicals were fine saying violence and killing are acceptable, as long as it's those evil people who are in their way.

That same fanaticism has found its way in other leftwing advocacy circles.  We all remember the good Ms. Thunberg (whose name is accepted by spellcheck), Climate Warrior extraordinaire, and her 'we're here to save the world, so get out of our way or else' rantings  The same with the BLM riots last year.  No level of destruction, carnage or death was unacceptable to the sacred cause of the BLM gospel.

While older, seasoned Boomer era leftists tried to twist and torture the English language to assure us that the BLM burnings and destruction were just peaceful protests, I noticed many younger activists would have none of it.  And that's where Mr. Chasuk comes in.

I realized he was trouble after the Jan 6 terrorist attacks, as they are described by the Left.  He was on Mark Brumley's page, going with both barrels against the unprecedented horrors of January 6th and how that was an indictment on, well, everything right of center.

I caught something though.  Most trying to explain how we rejoiced in the BLM protests while decrying January 6 were stumbling about trying every trick in the trade to avoid the obvious.  Some said there was a magical distinction between attacking government and even federal buildings versus the actual US Capital.  Others said the violence was coincidental and unrelated to the pure protests that were peaceful, as opposed to January 6.  Heck, I saw a couple try to insist the BLM violence was part of a vast rightwing conspiracy, that the BLM protesters were all about pace, love and John Lennon songs, but evil MAGA types snuck in to make them look violent.

Not Mr. Chasuk.  Nope.  He and others his age and  younger had a very simple message to distinguish between support for BLM protests and riots and everything that went with them as opposed to the January 6th ritos.  That distinction?  Easy.  BLM was right and just.  Sure we weep, we mourn, we lament the loss of innocent life during those weeks of riots and protests.  But the cause was just, and verily didst the slaughter of the innocent glorify the just cause.  Lucas Beaumanoir couldn't have said it better.

And that is something more and more younger and younger leftists are embracing, if the Internet suggests anything about it.  As they've already embraced bigotry and racism against the correct race, the glory of censoring and banning offensive material that's truly offensive, and judging and condemning endless swaths of reprehensive sinners for not being as righteous as they are, so they are warming up to the age old idea that sometimes violence is not just an answer, but a damn good one at that.

In fact, that was one benefit in seeing Mr. Chasuk, as opposed to other old codger progressives who flitted around Mark Brumley's FB page.  Many would try to excuse this or that, such as banning books because of racist messaging or judging people of the past without mercy by appealing to some trivial jot or tittle or parsing an obscure justification.

Not Mr. Chasuk.  He was fine saying censorship is good when it's against bad stuff.  And judging, duh, of course it's right.  Condemning entire groups of people based on this or that identity?  Is there a problem?  And violence and even the killing of the innocent?  Again, for the glory of the just cause we may weep, but we also endorse.

Now he is about two generations removed from Mark Shea, who would never say actual Republicans, much less innocent people, must die for the cause.  Nor would he ever come out and excuse the killing of innocent people under the auspices of it being a just cause.  Or at least I haven't seen him do so.  Mr. Chasuk and other people his age?  Oh yeah.  I've seen more than one explain why no end of violence against America is completely justified, even if the innocent must die - if there can be innocent in such a vile and racist nation as ours.

Mr. Chasuk, for his part, never said that we must kill the guilty and the innocent.  He simply made clear that when it does happen, as long as it is for the just cause (that is the leftist cause), it's an acceptable loss.  Collateral damage we might say.

The big question is this.  Since there is nothing stopping the Left at this point, and with each day we see it descend deeper and deeper into the Pit, what well the next generation or two after Mr. Chasuk be saying?  Will they leave it as 'we don't seek to kill, but those killed for a just cause - that is our cause - are acceptable losses'?  Or will they take it to the next step, as he has from the tired old Boomer leftists like Shea, and say it's time to go to the boxcars and lynch mobs, now hand us the guns?  Only time will tell. But I'm not optimistic.

Posted by David Griffey at 6:19 AM

Email ThisBlogThis!Share to TwitterShare to FacebookShare to Pinterest
Labels: The Culture of Death, The evil the Left does