The Problem with Jim Caviezel

Ah, I remember the hazy, crazy days of my entrance into the Catholic Church, when Mr. Caviezel was quite the guy.  He's the one who portrayed Jesus in The Passion of the Christ.  You remember.  That was one of the early shots across the bow that this Western Christian heritage rubbish would no longer be tolerated in our godless, post-Christian era.

Really.  If you recall, attempts to have the movie banned from American theaters were launched.  Even before the production was finished it was being called racist.  News outlets featured copious interviews with Rabbis who told us how wrong Christianity had always been.  I remember one even suggesting the Cross is a symbol of hate for many Jews.  Can't figure that line of thinking will go anywhere.  Meanwhile some liberal Protestant denominations openly voiced the same reservations about a Jesus movie that didn't feature messianic visions of gay sex with the apostles.  One went so far as to officially call the New Testament a form of Nazi propaganda.

Yeah, it was all back then during that time.  But when I came into the Church, the majority of Catholic bloggers I stumbled across were quite the Passion/Caviezel fans.  Now?  Now it's this, from everyone's favorite Catholic Deacon and post-modern Film Critic, the one and only Deacon Greydanus: 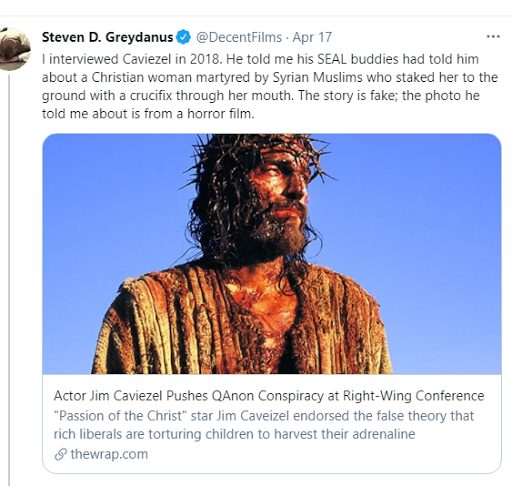 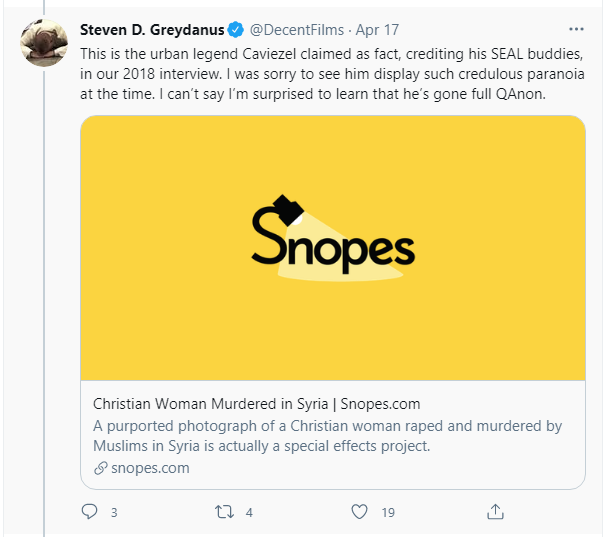 Woof.  Pretty brutal stuff.  Note how he adds that Caviezel and also Gibson (important to throw in there),  were the most 'incoherent' interviews he ever did.  I wonder if he ever pointed that out back when he did the interviews.  Hmmmm.  Here is an interview he had with Gibson in 2016 at a conference in which he describes Gibson's answers as 'succinct' and 'provocative'.  Here are his initial thoughts on The Passion as well.  Nothing about incoherent that I'm seeing.  Maybe he did say that about an interview back when it happened, but I was unable to find it.

Anyhoo. I do admit there is a problem.  Caviezel, like anyone with brains and a heart and soul, sees the terror on the horizon.  He no doubt sees the blasphemies, lies, racism, slaughter (1.5 billion abortions in a half century - well done women's rights activists!), the iconoclasm, the oppression, the duplicity, the corruption, the elitism, the classism, the coming tyranny and the general assault on everything good that came from the last 3000 years of Judeo-Christian civilization.

Problem is, there is no way your voice will be heard today if you notice these things.  The press has long died and is now in full blown, full frontal activist propaganda mode for the secular leftwing.  It doesn't even pretend anymore.  You would have to be the 'what camps in the German woods?' level of deniers to say anything else. If you can in any way challenge these things, expect to be shut out by the press and censored by the tech giants.

Likewise in Weinstein era Hollywood, most of the Entertainment Industry is at the beck and call of the new secular leftwing socialist movement.  Our colleges and  public educators are more or less thralls of  the leftwing.  Only recently, corporate America and our fine industrial and business leaders realized there's more money in the destruction of the Christian West than in its preservation.  Heck, even most religious traditions are, to one extent or another, right there.  That includes leaders of the same Christian Faith that helped build the values and morals now under attack.

So, for instance, a vast conspiracy like Black Lives Matter, which has taught the aforementioned industries and institutions to condemn anyone who says all human lives matter (well done that), is easily dismissed with actual facts.  Multitudes of statistics have been shown to prove the BLM narrative is on shaky ground at best, outright false at worst.

And yet from the United Nations to the Pope to almost every government on the planet, to our tech industries and social media providers, to our schools, colleges, our corporations, churches, movies, television shows, news outlets and rock bands - everyone preaches the gospel of BLM as if it is as true as anything that ever came from the mouth of Christ.  The same goes for whatever the media experts happen to say about Covid on any given day.  The same goes for Climate Change.  Immigration.  Gun control.  You name it.  If it's a leftwing narrative, or if it glorifies the 90 foot Left, you can bet 90% of the world's leadership and power players, and half the population of us little people, will be in lockstep with the latest pronouncements.  Even if they contradict yesterday's pronouncements.

Because of that massive deck stacked against those who see what is happening and have not yet donned their merry Rolfs, there is a tendency to then grab and run with anything and everything under the sun that purports to notice the same storm clouds.  No matter how false.  No matter how looney. No matter how unproven.

I won't say this is bad because it makes anyone fighting New Mordor look bad.  Dissenters will be mocked and ridiculed because their dissent exposes the obvious, and the disciples of the Left can't have that.  No, it's not good because you don't want to be as bad as what you're fighting.  If you go after this or that conspiracy theory*, then you are on shaky grounds when condemning all those who accept such unversaially accepted conspiracy theories like BLM, #MetToo, Transphobia, or whatever.

Best to let your yes be yes and no be no.  Best to stand on the Faith, the solid rock, and at the foot of the Cross.  Preach Christ and Him crucified.  Visit the widow and orphan and whatever you do, avoid being tainted by the stains of the world.  Remember to call good good and evil evil.  After all, as we see here, one of the most important demands on those who would align with this rising shadow is that they must unequivocally call good, or at least excuse, what they once condemned, and condemn everything and everyone they once called good. If anything shows who is on the wrong side of history, it would be that.

*Until there is actual evidence, it remains a conspiracy theory.  However many accept it is not evidence, as transgender normality or BLM demonstrate.

Email ThisBlogThis!Share to TwitterShare to FacebookShare to Pinterest
Labels: Catholic Church and the Left, Movies