Don't get me wrong in saying that.  Mr. French strikes me as a pretty clever fellow.  But he is as wrong as wrong can be: 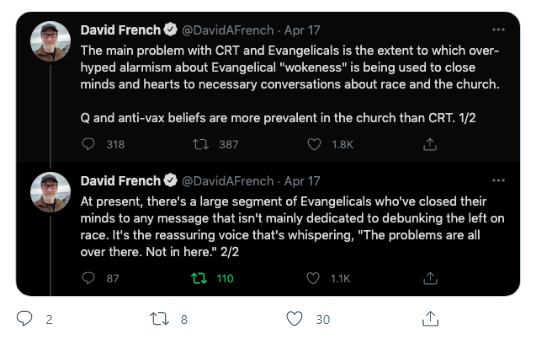 Critical Race Theory is simply racism repackaged.  You don't flirt with it or try to unpack the positives. Any more than you say, "Yes, but he did help the economy."  It's the Left's greatest 'you have heard liberals say, but the left now says' tricks.  For decades following WWII, racism was very simple: you judged people based on their skin color.  Simple stuff.  You fought racism by learning to judge people not by the color of their skin, but rather by the content of their character.  Again, simple stuff.

Starting in the 1970s, there were some kooks and lily white Pharisees running around insisting the real definition of racism can ever and only include white Americans who weren't as righteous and awesome  as they were.  Likewise, by the late 80s when I was in college, I remember some black activists speaking at campus who were warming to the idea that racism can only be on whites, so hating whites if you're not white can therefore never be racism. Nonetheless, as a society we continued to chug along under the idea that there is no race but the human race, we're all the same under the skin, and it's wrong to size people up based on skin color, ethnicity, national origin, or a host of other accidents of birth.

But again, demonstrating the owner of media brainwashing, we have said that such post war era was wrong, and the only logical solution to racism is to size people up by their skin color, ethnicity, national origin, or a host of other accidents of birth.  Which is impressive.

After all, Americans who accepted Jim Crow were born into a time where blacks had been thought of poorly for centuries.  Germans in 1930s Germany were embracing an anti-Semitism with roots going back thousands of years.  But this is brand-spanking new.  This is over night.  What makes you think that the ones embracing this new incarnation of old racism would have done any different in the American south a hundred years ago, or Germany in the 1930s?

But such is life and such is humanity.  I think I realize now what Jesus meant when He continually pointed out that final judgment was going to be replete with words like few when it comes to who will be saved.  After all, the tendency of humanity to embrace the broad way that leads to destruction seems to be in our bloodstream.  And nothing more than the sudden push to go back to judging based on skin color should demonstrate this.

Oh, and the same goes for vaccines.  In October, Trump was threatening the world by trying to ramrod vaccines for political gain.  Two days after the election, a vaccine was announced and we were saved!  I you believe that, meet me in Brooklyn.

Posted by David Griffey at 8:37 AM

Email ThisBlogThis!Share to TwitterShare to FacebookShare to Pinterest
Labels: Racism, The evil the Left does, The Power of Propaganda