A happy and blessed Holy Week to my Orhtodox brethren

A nifty treasure map for the occasion 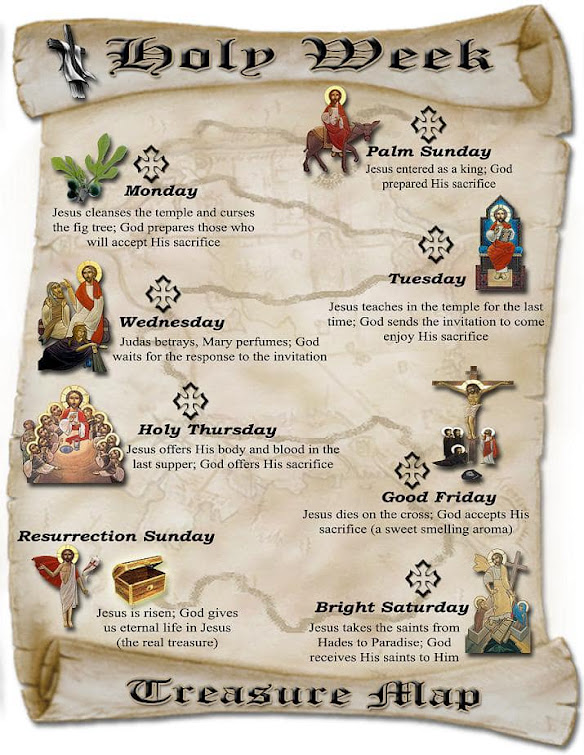 Nobody does Christian preparation like the Orthodox.  Their fasts were the stuff of legend, and rightly so.  As my sons said, the best way to live up to their often months long fasts was to open the door and graze on the grass in the front yard.  In fact, one of the problems with Eastern Orthodoxy was just how surprisingly cultural it was.  For us Westerners, those fasts were nigh on impossible.  But they were not for people in parts of Eastern Europe and the Middle East, where the fasts tend to align more closely to the daily diets and menus of the average population.

That was, in fact, one of the surprising things we discovered in the half decade or so in which we sojourned with the Orthodox side of the tracks.  Here in our Western lands, even our dying, anti-Christian Western lands, we still have a semblance of the Christian Faith's long shadow.  Many of the things we take for granted are rooted in eons of Christian influence.  There is also a sort of give and take with certain cultural tendencies that found their way into the Church.

So when we see something like Orthodox Christianity, more or less divorced from any noticable Western influence, we have a tendency of saying 'Ooooo, Ahhhhh, look how otherworldly and not-conformist it is.'  Well, here in the States it can look that way.  But in their own back yard, turns out their churches are just as linked to the cultural heritage of those countries and lands as a Baptist tent revival is with good old 19th Century Americana.

Nonetheless, a heartfelt wish for a blessed Holy Week.  Orthodoxy, like all faith traditions, is under the same assault as the faithful in the Dying West.  In some ways, the lessons they learned under centuries of Ottoman, Muslim and later Communist oppression have given them a different take on some of these problems.  Nonetheless, the sudden burst of openness and freedom that came with the collapse of the USSR has also exposed them to unique dangers that they are now only beginning to confront.  So prayers and best wishes through this Pascha season.

(to which we all respond, Truly He is Risen!)

(for those in our former church)

Posted by David Griffey at 2:38 PM

Email ThisBlogThis!Share to TwitterShare to FacebookShare to Pinterest
Labels: Christian, Orthodoxy, Religion in the World