All bigotry is racial 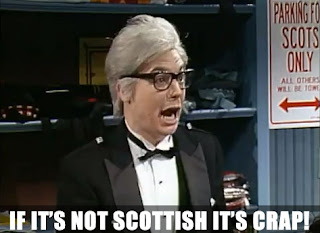 In America at least.  Because of the terrible legacy of slavery that we inherited from the British, and more than that, the horrible screwing that we gave the Native Americans throughout the 19th century, Americans typically see evil in two ways: Racially or it isn't evil.   So it is that in America, homosexuality as a race issue is more common in the arguments than you will find in other parts of the world where folks are pushing for gay rights.  A few years back, when I still went to the Huffpost, I got into a debate with another fellow who was from England.  I brought up the idea that there was no proof whatsoever that homosexuals were the same as Blacks or Asians, and therefore it was ludicrous to base support for the cause on that argument.  The fellow responded that I was loony for even going that direction.  It was England, not America.  Though I wonder if, seeing its success in America, using 'Gay equals Race' will become more common internationally.  Don't know.

Anyway, Americans typically see evil as that which is racial.  So we are keenly aware of the Holocaust, but not overly knowledgeable about the slaughter of Ukrainians under Stalin.  We know all about African slavery, but sometimes are shocked to find out that Africans practiced slavery themselves.  When Bill Clinton said we had to go in and stop the ethnic slaughter of Bosnian Muslims by Serbian Christians, he got the world, and America, to support him.  When George Bush said we had to stop Saddam Hussein from terrorizing and slaughtering his own people, not so much.

We know of our decision to drop the atomic bombs on Japan, and many assume it's because of our racist hatred of those slant eyed types.  We also lament the rounding up of Japanese citizens in WWII.  Less well known is the xenophobic genocide visited upon the Asian peoples by Japan, and even less than that, the fact that we rounded up German and Italian citizens as well.  Forget the fact that while most Americans are aware that Americans rushed in and razed more than one Indian village, but are usually ignorant of, or don't care about, the fact that Indians did the same to American settlements with women and children just the same.

We don't even bother with mass butchery and killing over political, social or national ideology.  So again, we all know what those Nazis did in the Holocaust.  But that tens of millions have been killed or butchered under the Communist ideology elicits everything from denial to casual dismissal.  We are keenly aware of the atrocities committed by religious fanaticism, but usually only if that was done by Christians against people of other faiths.  If other faiths did it to Christians, or others, we assume it was particular or unique, or we just don't mention it.

With the exception of Christian atrocities visited on other people, for Americans, the only real sin is racial.  And that usually means White, Europeans oppressing non-White, non-Europeans.  Christians always get bonus points in the evil category if they're part of the mischief which, by default, they usually were.

So I'll bet your average American would be shocked to find out that Scotland has an anti-Catholic problem.  Really.  A newspaper from Scotland calls out the crisis here.  Think about that. America has a race problem we're told.   Deep in our culture there is still a racial injustice problem. Possibly.  But apparently, Scotland has a similar type of anti-Catholic problem.  Imagine that.  It's almost like all the evil in the world doesn't necessarily stop at America's shores.  Sometimes, other countries might be capable of things just as evil, even if they don't look like the American version.  Sometimes that might be true in America, too.  Whether Americans will ever care remains to be seen.
Posted by David Griffey at 8:08 AM