Why do I keep visiting CAEI?  Why do I insist on subjecting myself to the pain and misery? In light of my post yesterday, I was asked this question.  If Mark's site is so bad, why keep going there?  It's true that going to CAEI is not enjoyable at all.  When I'm done there, I'm usually ready to renounce my faith, kick puppies, and join a terrorist cell.  So why do it?

Because Mark's was the first Catholic site I found on my way to the Catholic Church.  His was the first blog I visited.  His was the first blog I ever commented on.  He was obviously a conservative Catholic who wasn't afraid to point out when the conservative approach was wrong.  He was willing to point to the sins of our country, but do so with balance and never at the expense of praising the greatness of America and its heritage.  He could get rough, but that was usually reserved for those who attacked the Church in particular, or Christianity as a whole.  He didn't allow personal insults or personal accusations on his blog.  You could trash someone's ideas or opinions, but don't get personal.  And he made it clear that those who did trash others in the name of the Gospel were among the biggest problems in the Church, whether Protestant Fundamentalist or Catholics.

In addition, his writing had a pleasing quality.  When my wife read his articles back then, she commented that he wrote the way I talk.  He could be a bit snippy, but it was usually with a wink and a nod.  He injected a heartfelt emotional quality into works about theology and doctrine that more than one theologian could learn from.  When trying to explain Catholicism to Protestants, he was able to do so with respect to the better parts of Protestant tradition, while taking the whimsical jab here and there at those who rejected Catholic teaching.  Even on his blog he retained this quality to a degree, reserving what vitriol existed for those who openly advocated something like abortion or sexual deviancy, or attacked the Church, Christianity, or even America.

But all that was. And is no more.  Sigh.  Mark has become, IMHO, the Jack Chick of the Catholic Blogosphere.  The good news it there are other blogs not like that.  The bad news is that others are following in his footsteps, tossing out an increasingly long list of things that separate the deplorable Christian or Catholic goats from us awesome Catholic sheep who should be embraced my the modern Age.  The biggest problem?  Success.  Mark is now being turned to by mainline news outlets for interviews.  Mark is flying about meeting with other celebrity Catholics and bloggers, wining, dining, fellowshipping.  Receiving praise and adoration from a growing number of fans and followers.  Recently Mark said he wanted to go to Europe for book research, he just needed folks to contribute.  They did.  It's hard to tell someone to turn aside when their current course of action it getting them trips to Europe and the accolades of a media culture.

Still, I always hope.  Every now and then, he pops one off in the manner of olden times and ancient rhymes.  True, I doubt he'll ever go back.  He insists he's just a conservative Catholic calling out other conservatives.  But whether he is speaking falsely, or simply isn't aware of the obvious, he's not.  That would be like Limbaugh saying he's just a liberal Democrats at heart.  Mark's loathing and hatred for any and all who would be associated with American conservatism is beyond palpable. You can't miss it. Even if he's a gifted enough writer to allow wiggle room in his own mind, anyone with half a brain following his blog knows otherwise.  And many following his blog seem more than happy to join the trend.

Likewise he, like a growing number of other Catholic bloggers, are warming up to most things modern-liberal.  Perhaps that's where the Church is going after all.  Some say so.  Some say that with the exception of issues revolving around sexuality, most of the modern Church is following the same path as your average mainline Protestant denomination.  To be brutally honest, I don't know.  But I wouldn't condemn as stupid a person who made the observation.  And that has been said by more than just your radical pre-Vatican II traditionalists I might add.  Looking at the Church's take on homosexuality, women and men, social justice, war and death penalty, economics, immigration, biblical studies, science and evolution - it's not hard to draw parallels between it and many mainline Protestant denominations I know that are commonly called 'liberal.'  Perhaps it is going there.  If it is, it wouldn't surprise me.  I'm not a pie-in-the-sky Catholic.  I believe that historically the Church has zigged more than once when it should have zagged.  I doubt those days are all in the past.

And since Mark is zealous about his total and complete obedience to the Church here and now (at least in theory), it wouldn't be shocking to see him drift to  the Left, overlooking abortion rights Colbert while spewing rage and contempt for Paul Ryan.  Loving Jon Stewart and loathing Rush Limbaugh.  Pointing out that the Democrats who support abortion and Obama's war policies are wrong, but as a party there is much good while giving no credit to the GOP for anything positive no matter what.  Quoting CNN and Comedy Central as gospel while declaring that in FOX news there is none who aren't evil, no not one (literally, during the Kermit Gosnell story, Mark and others complained that mainline outlets weren't covering it.  Mark mentioned that FOX news had at least covered the story of murder and slaughter, but after being corrected by one of the growing number of more modern thinking commenters, he revised his story by pointing out that FOX couldn't care less about slaughtered babies; they no doubt did it for the ratings alone). 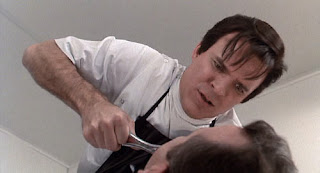 As a result of the changes, there's not much to see that's edifying or inspiring. And if I found his blog now, I'd conclude is was written by a passionate left leaning libertarian Ron Paul supporter who is pro-life and embraces most of the tropes of Woodstock liberalism.  And if someone else concluded that, I wouldn't condemn them.  I certainly wouldn't use it as a stepping stone to give up the world and enter the Church.

So why go back?  I always hope, that's why. Against hope, I go back every day thinking that this latest mea culpa will be a turning point, and we might get back to some of the balance and insight and feeling that Mark used to inject into his writings, and away from becoming another Jack Chick pretender in Catholic garb.  That's why I do it, in case anyone else is wondering.
Posted by David Griffey at 10:47 AM

Email ThisBlogThis!Share to TwitterShare to FacebookShare to Pinterest
Labels: Catholic blogging, Other Blogs