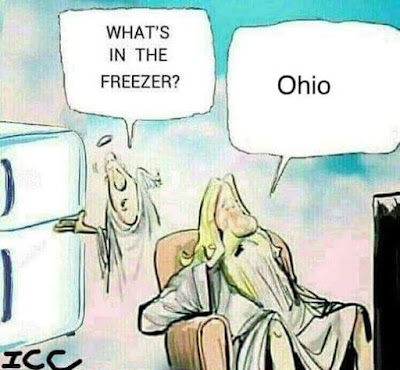 Because of Climate Change, we are going to get blasted by some of the coldest temperatures in decades.  When it's strangely hot in the summer, it naturally becomes Global Warming.  Make sense?

Not at all.  But ours is not to question why.  The news and the Democrats (and Pope Francis) have concluded it's true because the majority of scientists with pure hearts have read the models and concluded it's true.  Majority consensus being what makes things true of course.  Those scientists who disagree? They're the baddies and are corrupt and on the fossil fuel industry dole and all that jazz.

Of course the funny thing about things like this article is that it gets the simple minded to think 'wait a minute.  If there was life under that glacier, doesn't it mean it was warmer back then than even now?'  The fact that they say ice is melting faster than ever and yet we will be as cold as decades ago when, per scientists (who are honest), there was much more ice which didn't cause polar vortexes like this ... what the heck?

And yet, we believe it.  We have to.  Just like you had to oppose Communism in the 50s.  The only thing is, you don't have Hollywood or the press to bail you out today.  They're part of the dogmatic proclamation.

Do I believe our approach to industrialization was healthy for us or the planet?  No.  Which is why I think our modern 'let's do to human nature what we did to mother nature' attitude is as foolhardy as you get.  Especially given that, according to scientists, it's STEM that caused global warming climate change.  But I can't help but notice, the more people talk, that most of the big world shaking solutions will go little toward stopping our inevitable doom if the numbers are to be believed, nor will they inconvenience the millionaire and billionaire advocates and politicians (or the pretty well to do scientists who don't do badly today), but will likely hurt average middle class and lower middle class blue color types.

That fact alone bounces around my mind the more we watch this thing play out.  That, and the fact that science admits it was completely wrong about the whole DNA and gender thing up until a few years ago, and now can't quite figure the whole boy/girl and sex and babies links.  That those things are too complex, but a topic like the entire history of global climate is simple and true because the majority says so, is enough for me to say I smell a rat.
Posted by David Griffey at 4:37 PM

Email ThisBlogThis!Share to TwitterShare to FacebookShare to Pinterest
Labels: Global Warming, The Power of Propaganda