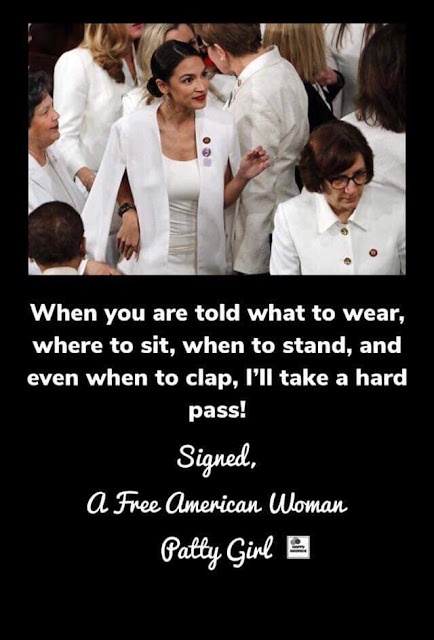 That's the image that came to my mind.  That, and the old tale about everyone continuing to applaud during a Joe Stalin speech because nobody wanted to be the first to stop clapping.  I kept wanting if they would respond to Pelosi if she commanded them to roll over or sit.  And then I remembered, she is commanding them to sit.

I love how the Left is now about flagrant racism, bigotry and discrimination based on race, gender, religion and national origin; about how those in the Left visibly must tow the line and do as commended (I don't remember a House Speaker ever treating those of the respective party like puppets who must continually dance on the strings according to command); it is the party of infanticide, debauchery, hypocrisy and one that makes its hatred of both America and, worse, the God of Christ and Christ's Church clear and obvious - and yet how many are still dancing around the obvious, trying to find ways to compromise, or even throwing up their hands and joining the club (ahem, John Kasich).

Go figure.  Nonetheless, it was good for a laugh watching Pelosi command the peanut gallery.  Creepy in a sort of police state sort of way, but funny just the same.

Oh, and  bonus laugh for everyone who caught the Dems all dressing in white.  I'll leave you to figure out the historical basis for those jokes, if we're allowed to joke anymore.
Posted by David Griffey at 11:15 AM

Email ThisBlogThis!Share to TwitterShare to FacebookShare to Pinterest
Labels: Left and a New Communism, Politics