What if condoms aren't fun! 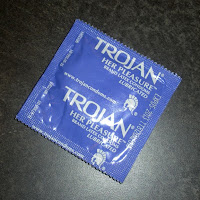 That title should get some attention. Over at Huffpost, Chris Kelly (of Real Time with Bill Maher) writes a scathing article about Sarah Palin's recent political victory and Alaska politics and what it all means. Nothing I wouldn't expect (my standards are so low for what I read at places like Huffpost, it's almost impossible to disappoint me). But the point that caught my attention (in an article with endless possibilities for criticism), was this little dig:

Also this week, Alaska's most famous birth control eschewer, Bristol Palin, told People magazine how excited she was to be joining Dancing with the Stars.

First, I wondered if Bristol Palin ever admitted she didn't use Birth Control (and to be honest, I didn't care enough about her sex life to plow through the endless reams of Bristol is this and that horrible name to find out). I mean, it isn't as if birth control is 100%. And if hundreds of millions of people are using birth control, that little 1% starts adding up to a fairly large number of folks (as my wife and I can attest regarding our first child). Perhaps it was because she did everything right and it still didn't work. That happens you know. The actual research communities (not the media pundits and folks with agendas to push) admit it doesn't always work. But even if she didn't use condoms (her boyfriend that is), even if in that moment of natural passion and ecstasy, she and her boyfriend failed to exercise that calculating precision of a microchip, that apparently means they were only human. Apparently, because after all these years, folks still don't use condoms 100% of the time even if they sometimes do.

Why? Well, because, er, they aren't fun that's why. I can't speak from the female side of things, but from a man's perspective, condoms were once best described as eating a nice Sirloin steak with a mouthful of Novocain: you get the basic sensation that you're eating something, but miss the flavor. That's about right. Plus, let's be a little more honest. In that moment of passion, that beautiful point in which the ultimate in human relations is about to be consummated, there just isn't a way to stop and put a condom on that seems, well, romantic. Despite numerous attempts by Hollywood to portray the act in some lovely, soft-glow candle romantic setting, it just doesn't fly.

But there's the rub. The Sex Revolution was based on the simple proposition that since sex is natural, and animals do it, so should we (being nothing more than glorified animals). Now, I'm at pains to remember a NatGeo special that featured animals using condoms. And while that little point seems to be a trivial matter, it isn't. Because the fact that the Sex Revolution has placed all its eggs in the condom basket, and believes throwing billions and billions of condoms at the problem will solve it, we seem to have lost focus on its greatest dogmatic pronouncement: That sex, by virtual of being a natural act, should not be hindered with artificial morals and human constructed ethical restrictions. So where do condoms come in? Are they natural? Isn't insisting they be worn a bit of an ethical demand? An artificial, human invented demand placed on a natural behavior?

At this point, expect to get blasted from all sides for pointing out that the emperor may indeed be lacking something in his latest wardrobe. When faced with this little point of order, advocates of continuing the same approach will point out that it's the best of all alternatives. They point out that kids will have sex anyway, and everyone will have sex anyway, so we had best do it [as] safely [as possible]. This is what has kept the Sex Revolution going even as the heart and soul of the sex revolution has been all but shattered. After 30 years of flinging copious amounts of condoms at various problems, while watching the body count of AIDS victims and the tens of millions of other broken lives mount, we should ask ourselves about that little definition of insanity we hear so much about.

For whatever reason, condoms don't work all the time, any more than telling people not to have sex works all the time. It could be because condoms are not devoid of malfunctioning. It could be because, when push comes to shove, couples who think they are in love may not want something produced on an assembly line in Princeton, New Jersey coming between them. But for whatever reasons, the facts are clear. Insisting on condoms appears to have the same inconsistency that insisting on abstinence does. In fact, the MSM (that's Mainstream Media) ran a series of stories based on a study a year or so ago that found kids taught abstinence were no better off than kids taught comprehensive (that is, birth control/condoms) sex education. The conclusion was that we should obviously ditch abstinence education. But the wise sages of Get Religion.com, pointed out the naked emperor in the room: if Abstinence education is no different than Comprehensive sex education, then why assume Abstinence Education should go? Aren't they the same? Why not ditch the Comprehensive courses - if the results were alike?

And thus the gorilla in the room. For it all, this has little to do with utilitarian approaches to moral behavior. Obviously, after going on 30 years, we can see condoms fluctuate in their efficacy for solving problems with the same variations that abstinence does. Sometimes it works, sometimes it doesn't. Which one we choose has little to do with the data, and much to do with the agendas. And maybe it's time to kick back and think of the agendas, especially now that we have almost a half century of results staring us in the face.
Posted by David Griffey at 9:24 PM