Is Alan Grayson a Jerk, or simply clever? 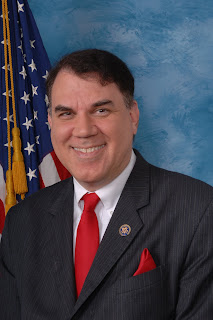 Alan Grayson is, in my opinion, an obnoxious jerk. I'm not one to say all politicians are evil, stupid, corrupt, or anything like that. I admit that politics is a practical profession, and therefore can quickly drag people down. And I know that politicians are political, often because we the voters wouldn't vote for them if they weren't. Still, the inefficiency, the deplorable state of our nation, the continued sniping and petty bickering and obvious concern for party loyalty and reelection over the well being of the country makes the overall world of politics in America today seem pretty dismal.

So it's always amazing when a single person can arise to take an already negative situation and make it worse. Alan Grayson is that kind of a man. A Democrat relishing in the fact that he can say to Republicans what Republicans would never - ever - get away with saying to Democrats, he has shown himself to be everything that one-dimensional attacks on all politicians attempt to portray. Now, I can deal with him insulting and acting like a spoiled brat six year old on a kindergarten playground who wants everyone to play his way. Nothing in any of his interviews has suggested I should expect anything else.
But this latest attack bothers me. Many are bothered because he has compared his opponent to terrorists. Well, that's not the first time it's been done, and probably won't be the last from either side. What bothers me is that he took a part of a talk given by his opponent, Dan Webster, and flagrantly edited it to make it appear as if he is saying something he didn't. Webster, in effect, was telling religious men not to take passages in the Bible out of context, such as wives submit to your husbands. Rather, Webster admonished, we should look to the broader picture that emphasizes love for the wife the way Christ loved His Church.
Grayson's people took the sliver of 'wives submit to your husbands' and splashed it on the ad to suggest this was Webster's own view, when obviously it was the polar opposite of what Webster was saying. Even MSNBC threw a towel down on that one. But Grayson was defiant. Why? Because I have a feeling that Grayson has tapped into a reality in our culture that he has every intention of exploiting.
In the modern age, when we can easily see that Grayson and his people have lied, edited, and by implication, falsely accused his opponent, I think Grayson doesn't care. He has to know that many who will support him don't care either. In fact, he must know we live in a society where an increasing amount of people don't care about anything but their agendas being advanced, and their side winning. Grayson also must know that the press will, at best, give lip service to the problem, for he is on their side. Sure, FOX News will fuss, but that's only aimed at those who wouldn't listen to Grayson anyway. So Grayson continues to defend the indefensible for anyone with a concern for honesty, meaning few who appear to be in our culture today.
Despite AT&T's insistence that the Internet makes us smarter, I'm beginning to wonder. It seems to merely be a place were we buttress the truths we are willing to accept. And the more we are willing to ignore lies, the more we are willing to hedge ourselves with walls of conformity to preexisting biases, the less concerned our politicians, or professors, or even preachers will be about telling us the whole truth. After all, they will learn that telling us what we want to hear, no matter how flagrantly false, is what we really want in the first place.
Posted by David Griffey at 4:40 PM