Traveling medicine shows then and now 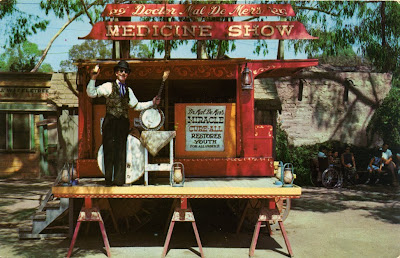 We've all seen portrayals of the old time medicine shows where the con man comes to town with a bottle of mother's little helper, slaps a skull and cross bones on it, and passes it to the ignorant yokels as the cure all and fountain of youth they were yearning for. We all guffaw at the silliness. We feel confident in our own intellectual superiority.
But not so fast. For we also have the traveling medicine show of the information age. That is, the 'clinical study.' It can be called other things, 'experts say', 'studies show', 'researches have found', but it all says the same thing: a piece of paper containing information so ultimately worthless that the only reason we believe it is because we want to believe it.
Of course, not all research is bunk, and naturally some studies can, over the years, reveal things that can be helpful to humanity. Because of that, we are inclined to be suspicious of anyone who dismisses outright the attempts to use science to help humanity. As well we should. Because, again, such endeavors can be quite beneficial. But in many ways our modern world - in which we are agenda, not principle, driven - has made these into a three-ring circus worthy of contempt, not worthy of attention from an already overwhelmed information consumer. There are three reasons why this is so.
First and most obvious, the 'research' can be easily manipulated. For whatever reason and however it is done, the variables and the results can be twisted and turned to make sure the results of the experiments say what the researchers want. Has anyone ever come out of a test and provided the media with a headline that says 'we thought X was true, we wanted X to be true, but it turns out it wasn't'? I can't think of a time. Rather, I often see tests that make me think the research is simply the parsing of an academic to prove what he or she wants to prove. Take for instance the tests showing spanking leads to violence. How often do these seem to smell? I, for one, generally avoid spanking my kids. But nothing done by these researchers is behind my decision. Every time I've seen 'proof' of spanking's violent results, I look at the tests themselves and get the strange feeling that the deck was stacked to make sure spanking looked as much to blame as possible. Plus, of course, I can't ignore the fact that youth today are more overall violent than any time in our recent past, and yet fewer people spank today than ever before. Sometimes this twisting of the facts counts on a sympathetic media and reader, willing to ignore the forest in order to find a few validating trees.
The second problem is the spin. Even if all good intentions were followed, and the tests weren't crammed into a situation where the results were a forgone conclusion, it still allows the researchers, as well as the media, to spin the results their own way. A couple years ago, headlines splattered across the media that a study had shown that 'people born int he 40s had premarital sex!' Now, that's supposed to make us think of the WWII generation, that old fashioned, gray haired Greatest Generation. And that is how it was covered. Just goes to show you one of the most important planks of the Sexual Revolution Platform - that everyone has always done it - is true. All those grandparents out there were romping in the back seat of their 39 fords like we do today.
Problem was, that wasn't true. First, the test actually found a significant drop in those who were born in 1930 who admitted to sexual relations before marriage. It wasn't until those born in 1940 were surveyed that the numbers increased. And they would be the ones who were teens in the 1950s at the dawn of the Rock Era, and in college in the 1960s. What! You mean those college kids in the 60s weren't having Bible studies! Yep. The test actually showed what common perceptions have told us - that sexually promiscuous behavior skyrocketed after the war years with the generations growing up in affluence and comfort. But since that's not what we want to believe, the researcher (just one researcher by the way), as well as the media promoted it accordingly.
Another excellent point was a study that found abstinence education was no more beneficial than comprehensive sex education in preventing certain sex related problems. The media spin? Get rid of abstinence education. Of course some clever and insightful individuals immediately asked why this was the conclusion. If one was no better than the other, why assume we should only get rid of one?


Finally, the biggest problem is we can just ignore the data when it's inconvenient. If the tests were pure, and the results clear, we can ignore them just the same. We don't know, for instance, the long term impact of same sex couples raising children. It hasn't been happening that long, and there aren't that many who have done it. We'll have to wait. What we do know is that every test ever done has said that children need both a male and female presence in their lives to grow up fully formed and exposed to everything they need to live a fulfilled life. That is almost unanimous. So how do we, a society pushing like a juggernaut to accept gay adoption, deal with this? We ignore it. We ignore decades and decades of study after study because they don't say what we want.
So those are three big reasons. There are others, of course. One is the disproportionate attention our media can give to one small crackpot researcher with an axe to grind and no real credentials other than wearing a lab coat. But in the end, what we have is the good that science could be bringing being reduced to a mere traveling side show, a joke. Something that is as useless, in the end, as the cure all medicines of yesteryear.
Posted by David Griffey at 2:35 PM

Email ThisBlogThis!Share to TwitterShare to FacebookShare to Pinterest
Labels: Scientism