Is there honor among thieves? 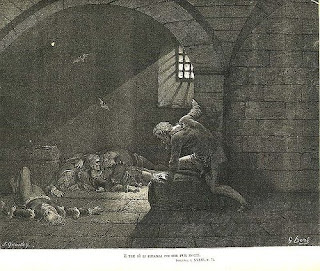 Historically, the answer has been no. Generally, thieves have been seen as a dishonest lot. And because of this, folks have typically assumed that thieves are not only to be distrusted, but are likely to be distrustful. After all, a thief is dishonest, so why not assume everyone else is? And this got me to thinking. Obviously, as can be seen by the number of musings on this topic, the whole NYC Mosque/Koran Burning has been on my mind. Beyond the coverage, there has been something that isn't quite right. Why? Because everything we are being told is being contradicted by the very ones doing the telling.

We are told over and over, for instance, that the biggest threats to our freedom are in our own backyard. Not American Muslims, but Right Wingers, particularly of the Christian variety. If we have anyone to fear, if there is a source of percolating violence, it's there. We are told that except for a few radicals in the Islamic world who in no way represent Islam, that Muslims are peaceful, good folk who wish no ill on anyone.
We are told that Muslims have experienced threats, intimidation, ostracising, and violence since 9/11. And it's getting worse. But I'm not seeing it. I"m not seeing any more than any other religion has experienced that over the last ten years.
I'm told that this pastor in Florida who wanted to burn the Koran is scum of all scum, and merely represents that inherent bigotry and racism that has always defined America at its worse. Meanwhile, yet another release of a Pew Research survey finds that Muslims by the tens of millions support terrorism. But that should never reflect on Islam, Muslims as a whole, or any such thing.
There's a 'what am I missing' feeling, a sort of 'You sure the emperor isn't naked?' sense I get in all this. My gut feeling tells me it's because of the biases we accept about ourselves. That willingness, unique to America and the West, of seeing the worst in our own history, our own culture, ourselves.
That explains why we interpret everything that way. But why do we, even in the face of overwhelming evidence, continue on with the picture of hordes of mad and sadistic American racists butchering endless bus loads of hapless Muslims when there is no such thing? Why to we continue to say, despite evidence to the contrary, that all criticism of Islam is the result of shameless bigotry and racism and ignorance?
Well, there is the Super-Narrative answer. And that's likely true. Why in this media age where we can hear and see folks, even Pastor Jones, insist they aren't really against Islam, do we insist it's all because Americans are really just against Islam? Surely that should have some impact. But it hasn't.
And that's why I bring up the old saying about thieves not trusting because they are dishonest. Maybe it's because, in the heart of hearts of folks accusing Americans and anyone who dares criticize Muslims or Islam, those folks know their own condemnations of things like America, Christianity, Catholicism, or Organized Religion are not based on facts, data, and reality. Instead, they are really based on bigotry, agendas, and stereotypes they know to be false, but continue to promote for various reasons. Maybe the news anchors on CNN, that look at the fact that there really hasn't been much violence against Muslims in America, and then promptly tell us that Muslims had better be shaking in their boots; who assume that Americans protesting the Mosque are really a bunch of bigots because, well, they are the bigots.
Perhaps all these years, all the stories we hear about this or that Christian group, this or that traditional religious leader, this or that Christian movement, has not been because it was a story that needed covered that way (usually negative), but because of the media's own prejudice against Christianity and its traditional teachings. Maybe all these years when they assured us they had nothing against traditional Christianity, despite running shows comparing Christians who teach abstinence with Islamic terrorists, it was because they really do hate Christianity. And because of that, when they hear overwhelming numbers of Americans insist they don't hate Islam or Muslims, but do think for sensitivity's sake the Mosque should be moved, those journalists don't believe it. Because they consciously or unconsciously assume that, like themselves, the motives must be far darker and more insidious. Just a thought.
Posted by David Griffey at 3:02 PM

Email ThisBlogThis!Share to TwitterShare to FacebookShare to Pinterest
Labels: Decline of the Christian West, Super Narratives