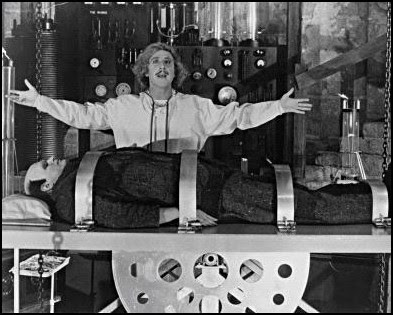 and my growing lack of faith in scientism. Stephen Hawking plays off the modern deification of science and scientists by announcing he can prove God is no longer needed to explain the universe. Why? Because we have gravity and other laws of physics, that means we don't need God any more. Now, is it just me, or is there an obvious and incredible leap in that logic? We have laws of physics, therefore God isn't needed? Wouldn't that merely suggest what believers have thought for centuries, that God created the laws of the universe?

I'm sorry, and I don't mean to be, well, mean. I know he has his condition and all. But the things he says that aren't confined to the physical universe, black holes, and other neat theories are just straight out of Glenn Beck style loony. Take this little gem:

In his latest book, he said the 1992 discovery of a planet orbiting another star other than the Sun helped deconstruct the view of the father of physics Isaac Newton that the universe could not have arisen out of chaos but was created by God.

"That makes the coincidences of our planetary conditions -- the single Sun, the lucky combination of Earth-Sun distance and solar mass, far less remarkable, and far less compelling evidence that the Earth was carefully designed just to please us human beings," he writes.

I'm not a scientist, so maybe it's ignorance on my part. But I thought we've known for all these years that there were zillions of suns like ours in the universe, and that around these suns were zillions of planets rotating like ours. I didn't know that meant anything or was some big surprise. Besides, that life could exist in other parts of the universe has long been dismissed as some smack down for religion. Certainly it wouldn't be for some abstract belief in the Divine.
It appears that Mr. Hawking knows little about theology, philosophy, religious thought, or many things not involving mere physics. Like so many scientists today, he focuses on a singular discipline and then dismisses everything else. His digs at religion in various speeches suggests he's studied all the history you can by watching Hollywood movies. And his calls for moon colonies in the next forty years to save an acceptable percentage of humanity (apparently those who won't be saved are acceptable casualties according to his calculations) is just milk-out-your-nose hilarious. As Mark Shea points out, we could build a self-sustaining metropolis in Antarctica before we could do the same on the moon, much less Mars.
Yet the MSM treats him like a god descending from the clouds. Why? Because he has a lab coat and is one of them smart scientist types, that's why, no matter how mad he sounds when he tries to speak outside his realm of expertise. It's become one of the Super-Narratives of our age, the intellectually infallible scientist. Which, for a generation of humanity living on the leeward side of mushroom clouds is not only asinine, but inexcusable.
Not that science itself isn't a good thing. Not that it can't tell us how light works, or how bread mold can be used, or why leaves turn colors in autumn. Not that it can't give us air conditioning, medicine, and computer games (though note most of what science gives seems to be a two edged sword, as MMGW advocates unwittingly point out). But a society that dismisses everything else in the world but science and scientists will be left with a world that never again bothers to ask if we should do something, but will only ask if we can do it. And again, after the 20th century, there is no excuse for such carelessly placed worship of the intellect in such a narrow field of knowledge when the representatives of that worship have such a mixed track record, and are capable of intellectually sterile statements like those of Mr. Hawking.
Posted by David Griffey at 7:44 AM

Email ThisBlogThis!Share to TwitterShare to FacebookShare to Pinterest
Labels: Media, Scientism, What We Learn from History