Apparently many have rightly condemned his cowardly and spineless browbeating of an elderly woman. Sims, for his part, at least makes clear his utter hatred for Christians and his desire to eradicate the right to not support aborting babies and gay sex.  Also, there is evidence to suggest that he offered to pay people to Dox (a new word I learned, meaning expose personal information on the Internet in order to bully, threaten and intimidate) teenage girls who were protesting.  Again, pure evil and an example of the worst of the emergent Left; a Brownshirt styled thug who I have no problem believing would do the worst we can imagine for his cause.

Meanwhile Matt Walsh and Live Action and Lila Rose and others are coming out to stand for the beauty of life and the cherished freedoms of speech and the right to protest against Sims's Bolshevism for Sex political platform.  Along the same line, others recognize the ugly and racist denial of the Democrats when it comes to aborting blacks out of existence: 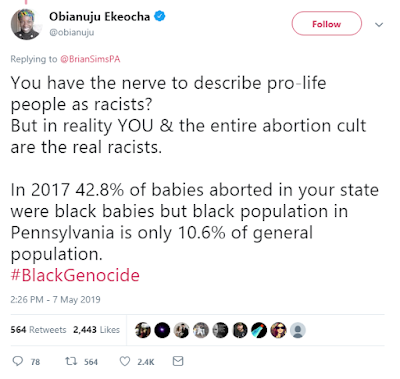 Swinging in to damage control mode, on the other hand, the long forgotten (and ignored) Mark Shea steps in to remind us why the upcoming fight will be a tough one, owing to those believers who will gladly align with the enemies of God and man: 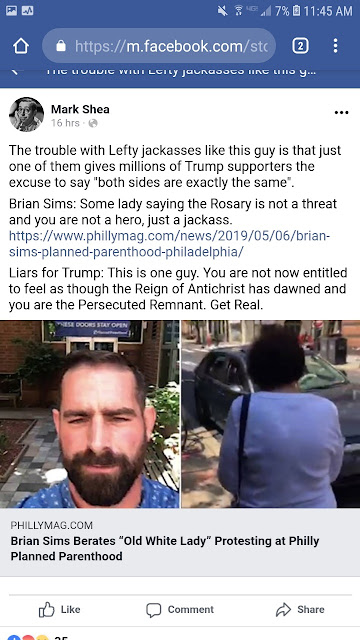 Mark swipes away the morality of verbally bludgeoning an elderly woman and mainly chastises Sims for helping the 'other side'.  That is something Mark used to condemn in no uncertain terms, the idea of being outraged by immorality because it hurts 'the tribe.'  Another in a growing list of things Mark does that he once said will lead to Hell.

So the Good (those justly outraged at the cowardly lawmaker browbeating an elderly woman and threatening teenage girls), the Bad (Sims and his 'screw you scum followers of Jesus, I hope this Soviet state will someday put you in your place for opposing abortion and gay sex'), and the Pathetic (Mark Shea's 'Don't browbeat that old woman, you'll help their tribe!'), all on display due to this craven act. Exposing this level of evil is like applying warm compress on a boil: it draws out the pus, but also promises healing.  If, of course, the forces of goodness and virtue take a stand.

Though a word of caution.  Many are pointing out that the response to this, Mark Shea aside, has been overwhelmingly negative - because it's wrong, not because it makes Trump look good.  Yes, that is good.  Remember years ago, however, when a few lawmakers suggested banning Chick-fil-A over the owner's stance on gay marriage.  Response was overwhelmingly negative and the lawmakers universally condemned, both in and out of the LGBTQ community.  Now look at things.  The question isn't if everyone is condemning this.  The question is, if we continue on the track w'ere going, will they condemn it as much in another ten years?

Coming in with another angle, Rod Dreher chimes in here, reminding us of those ancient days, when the MSM went crazy with around the clock coverage of vile white skin racists (redundancy there) from Covington High School who assailed helpless Native Americans.  Now look at the dearth of mainstream "journalism" covering this story:


The press is dead.  It is the ministry of lies and propaganda (or Truth, as my boys say).  It is one of the great threats to the Truth, mankind and freedom in our world today.  Well noticed Rod.  And worth remembering when thinking of how the media channels the narrative today.
Posted by David Griffey at 6:54 AM

Email ThisBlogThis!Share to TwitterShare to FacebookShare to Pinterest
Labels: Censorship for the Stupid, Culture of Death, deals with the Devil, Left and a New Communism, The evil the Left does