So I saw this pop up again: 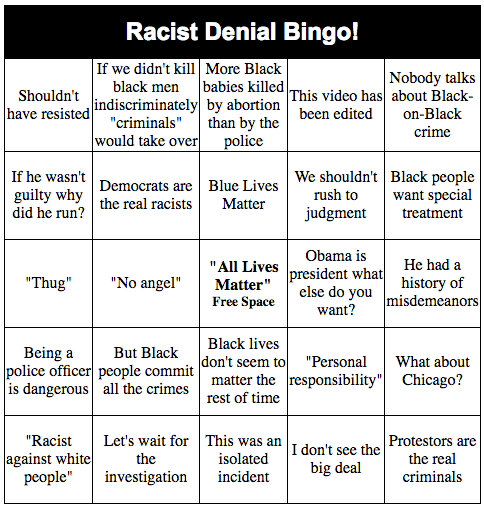 It's supposed to be a slam-dunk smack down of those who dare question the Leftist narrative regarding Black Lives Matter.  I've seen it several times.  Back when I still went to Mark Shea's sites, I saw him post it more than once.  It's like a child who thinks they slam-dunked you by denying it was their hand in the cookie jar since cookie jars don't have hands.  It's stupid, but the child thinks it's brilliant.

Anyway, here's an updated version I did to clarify why so much of it is stupid, jack-ass, moronic, whatever you want to call it.  And that's at its best. Some of it is pure rotten to the core evil.  Here is the updated version: 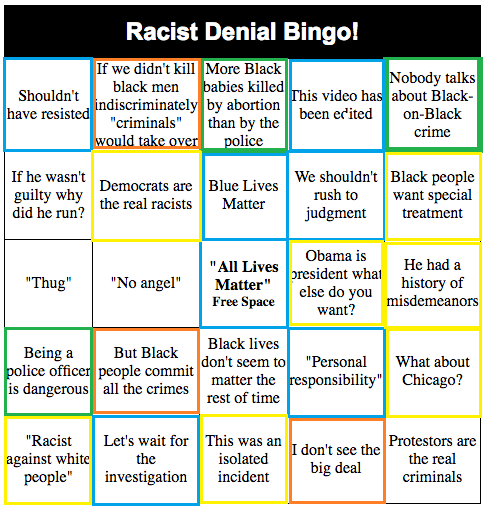 The colors mean different things.  First, those without colored borders on all sides are the ones that, if someone actually said such a thing, would be stupid to say. Or wrong.  Or pointless. In this case, the chart is correct.  For instance, tossing out the term "Thug" doesn't help.  Not that I've heard people say all of the things with the black borders, but I've heard variations on some, and never felt they helped the case.  Those I've not heard in respect to this topic I've heard discussed elsewhere, so I'll assume they could have been used.  And no, I don't think they help or are of much use.

The Green outlines are facts.  They are true.  They should be facts that are so horrific that they would bring our nation to a screeching halt, or at least engender some nod of assent because we acknowledge it's obviously true police risk their lives, or that abortion and black on black crime hurt the black community more than anything else in our nation.  That some - including Christians - would mock such truths casts serious doubt on just how much they give a damn about black lives unless they can exploit those lives for political gain.

The Blue outlines are what I call the Horse Sense squares.  They are obviously true, and up to a couple decades ago, the vast majority of Americans would have said wait for an unedited video to be examined before joining a lynch mob and destroying neighborhoods, or that personal responsibility is a thing.  Funny how Christians who post this stupid meme join in mocking things that are pretty Christian, if not common decency and wisdom.

The Yellow outlines are those things that, depending on the context and the subject at hand, could be valid arguments.  For instance, recently in our neck of the woods, we had a bunch of BLM protesters wanting a cop to be charged for shooting an armed assailant who was holding a civilian at gunpoint.  I mean, if the black assailant who was shot was threatening the life of a civilian, and you're still on the assailant's side, it's a bit tough to argue that you're not wanting some form of special privilege.  Or in another case, the word of a man admitted to have committed a felony with children in his van is taken over that of the police who said he tried to kill them.  Why?  You do the math.  Likewise, a survey of the number of racist, antisemitic, sexist and bigoted actions and statements coming from Democrats and/or Leftist pundits is certainly a discussion worth having.  Nonetheless, these may be able to be had apart from the BLM issue, so they could be right and still not speak to the topic at hand (armies of white racist police gunning down millions of hapless and innocent black Americans).

Finally, the Orange are arguments that would be worth mocking, if anyone used them.  As it is, to this day, I've heard nobody use such arguments as 'blacks commit all the crimes' or 'we have to indiscriminately kill black people to keep crime down'.  I mean, those are just stupid.  Again, I've heard nobody say anything close. That's the old 'preemptively shove words into the mouths of a vaguely defined group of people, then preemptively attack them for such a stupid thing that nobody said.'

That's the chart as I see it.  Mostly wrong, a bit of evil, lots of stupid partisan hackery, with only a couple points that have any worth at all.  I'm going with the All Lives Matter response.  If you are against saying All Lives Matter, it's time to do some serious rethinking about where you are in the currents of the world's history,

Of course one way you can Bingo all of my objections is to do what many on the Left do, and that's move straight to judging the hearts and souls of all who dissent from the Left's truth claims.  So sure, personal responsibility is a thing.  But since I dare question BLM, and since BLM is as true as the Gospel, it must mean I'm a vile racist right wing Nazi who hates blacks and that's why I object!  You can tell by my skin color!  The 'screw you Jesus, I'll judge anyone based on their skin color if they blaspheme the true Gospel of the Leftist State' is always a good go to when all else fails.  It appears a good approach to defending the Left that is all the rage - even among Christians.
Posted by David Griffey at 8:13 AM

Email ThisBlogThis!Share to TwitterShare to FacebookShare to Pinterest
Labels: Bigotry for the Hip American, Racism, Stupid is as Stupid is