Or rather, Peter Mayhew, who passed away according to a release by his family.  He was seventy-four. 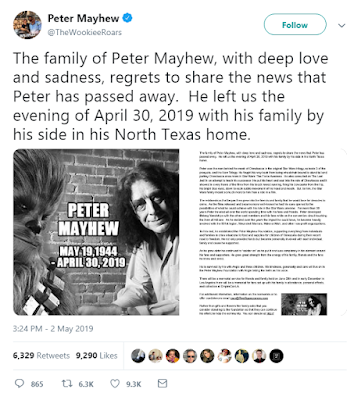 I am not a professional word-smith, so I'll never be able to find the words that can express the sheer magic of that time in my childhood.  Seeing the first Star Wars in theaters, at a time when most space movies were of the B-sort shown on Saturday matinee television, tweaked my imagination like nothing I've ever seen since.  Spielberg was correct when he said movies would never be the same.

It was an exciting time and a frightening time, but Star Wars dominated the popular culture from 1977 through 1980, when it ushered in what I call 'The Great Fantasy Renaissance.'  Smack in the middle of the Decade of Realism, science fiction and fantasy suddenly exploded onto the scene.  Spaceships and monsters and aliens and dragons and wizards were everywhere.  And Star Wars stood at the top of the hill.  It was everywhere.  Adults watched it, teenagers watched it, and kids watched it as much as they could.

Naturally, we didn't know Mr. Mayhew from anyone.  We knew him only as the 200 year old Wookie Chewbacca, part of a phenomenal cast of characters that were etched into our collective psyches.  But however we knew him, I'll always thank him for being part of such an enchanting time in my life.  God receive you Mr. Mayhew, and may the peace of God cover the hearts of your loved ones.

Posted by David Griffey at 7:11 PM