The Left's all important unpeople

The unperson.  You know the reference.  In the current framework, it means those who are out of favor because they are irrelevant or inconvenient for the cause.  You know, the former homosexual who put the lifestyle behind him to get married and raise a family.  The woman who believes children need two parents in distinct roles to raise them from a home, not a daycare center.  Heck, the woman who opposes abortion.  The black who votes republican and rejects the theory of systemic racism or even admires Robert E. Lee.  Or the most recent and growing unpeople, those who regret that their parents and doctors changed their gender because at the ripe old age of one, someone reached for a blue blanket.  You get the point.

On the other end of this scale are the negative unpeople.  Those are the ones who aren't white or male or Christian or American and yet do naughty things.  The black who murders whites after posting a racist screed against white people.  Or worse, the black who murders Hispanics, Jews, or anyone else in a designated minority group.  The child raping homosexual.  The Islamic terrorist who coincidently keeps mentioning Allah whenever she kills someone.  You know, the ones that break the 'if it's evil, it must be white or conservative or male or Christian' narrative.

But then you have the worst group of unpeople, the inconvenient victims.  Jazmine Barnes will forever be the poster child for that group in my mind.  They are the ones who suffer, die, are tortured or otherwise oppressed and abused - but can't be exploited to advance a progressive agenda.  Mass shooting victims at the hands of a Muslim or a racist black man.  Children abused by transgender or gay individuals.  Victims of almost any disaster that can't somehow be laid at the feet of a group targeted by the Left.  And that includes Americans suffering and struggling whenever there is a Democrat in the White House.

To deny that this is the way it works - and not just passively, but on purpose through carefully constructed media narrative templates - is right up there with believing the moon landings were a hoax.  It's nakedly obvious.  And it's purely evil.  Especially evil is that last category.  For the Scriptures do not say care for the widow and the orphan if doing so dost glorify the Left, otherwise ignore them.  Yet how many believers today seem so programmed by the media's machinations that you can bet they will care when the press cares, and care how the press cares, or not really care at all.

I thought of that when I got this email from a reader.  I don't typically post emails I get - though I read them all.  But this one is worth noting just to see it's not me running about imagining things:

I noticed something kind of amusing. The usually verbose Deacon Steven Greydanus, always eager to share his thoughts on systemic racism and the moral turpitude of Donald Trump voters (a group I do not belong to), was uncharacteristically silent in response to the Kavanaugh news on Wednesday. Nothing on Facebook or Twitter.

Yep.  In fairness to Deacon Greydanus and everyone else, if you blinked you'd miss the media coverage in general.  You have to Google the tragedy by name to find stories.  I Googled 'News' when I first heard about the horror to see if how low on the list of stories it was.  Turned out it wasn't even mentioned in the general news feed.  And that was a mere couple days after it happened.  They just don't matter because Christians murdered are themselves small beans in the leftwing narrative.  If they were murdered by members of a designated minority group, that's even worse.  The story must die and die fast.

A terrible, demonic evil.  Yet when I went to several Catholic sites and blogs to see any prayers or mention of the attack, I saw none.  At least Deacon Greydanus did mention the horror, chastising the press for failing to mention Pentecost in its stories. 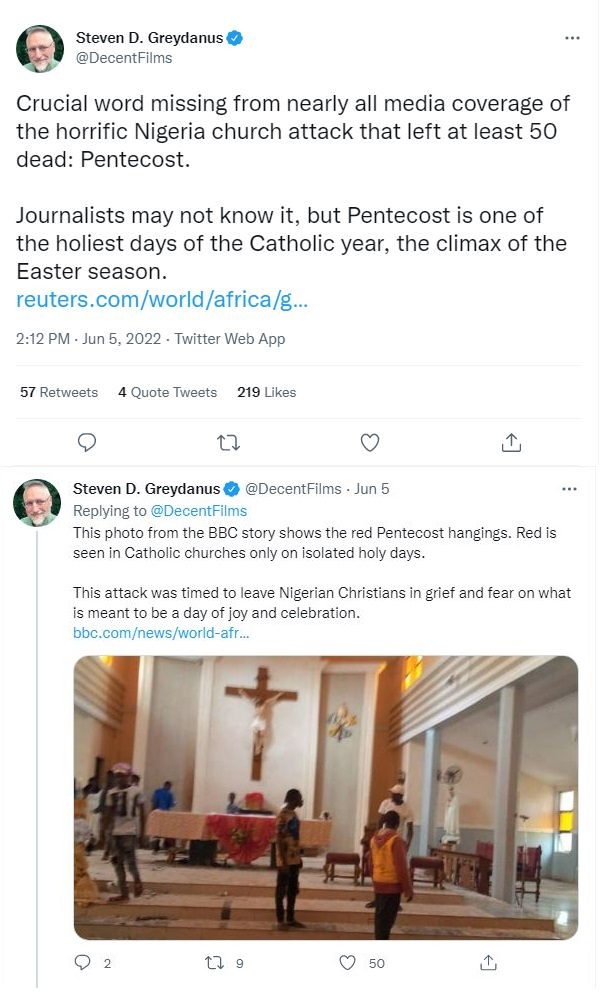 But that's it.  That's the only mention I found from him.  Others like Shea or Dawn Eden, at least based on what I found on their sites that I know about, mentioned nothing at all.  True, there could be other social media sites where they post and perhaps they did.  Perhaps they commented somewhere else if it was brought up. I sure hope so.

But I know on the very same platforms in which they went on tirades about gun control, or lambasted Kavanagh, or pledged to post on Twitter a daily celebration of BLM, there was nothing.  And that silence, driven by the media's mandated concern for human life only when it can be exploited, screams volumes.

Email ThisBlogThis!Share to TwitterShare to FacebookShare to Pinterest
Labels: deals with the Devil, Evil, Exploiting Evil